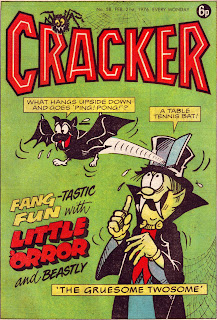 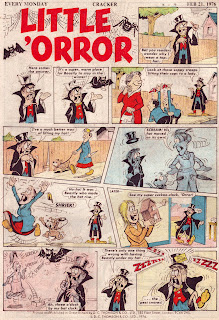 Here is a comic that is one that you don't often here about, I don't think I had heard of it untill I got these pictures, so I can't really tell you much about it and its contents. I would guess that it contained a varied range of comicstrip characters, but the cover and strip here is of course what the Cobwebbed room is interested in. I really love the artwork from the Little 'Orror strip and it also reminds me of Horror Bags Vampire, maybe the strip was inspired by this image of the vampire. 'Cracker' comic only lasted for about a year. The cover above is from the 21st Febuary 1976 issue.

Thanks to Rich
Posted by Paul at 11:40 pm 3 comments: Links to this post 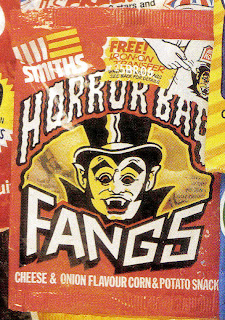 Its a shame that the above picture is not an actual scan of the bag itself, but what we have here is a scan from a book called 1970's scrapbook, what is great about another picture of a Fangs bag is that as you can just make out is another item in the number of promotional items from Horror Bags. This time a cool looking Iron-on transfer, from what can be made out this would of made one of the must of items by sending those empty packets, I would love to have a T-shirt with the Horror bags/Vampire logo on. I wonder if any of these T-shirts exist still with that transfer still intact which kids would of probally got there mums to iron on. Maybe one will turn up in a charity shop/jumble sale or maybe some were passed down to the next generation, or just worn away as they tend to do.

Thanks to Darren
Posted by Paul at 11:28 pm 2 comments: Links to this post 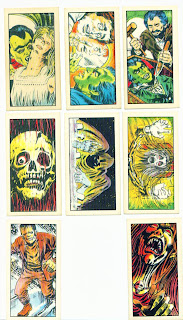 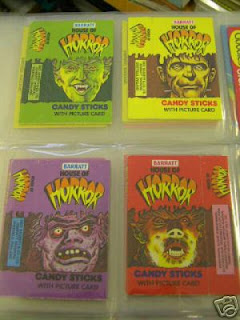 Sweet cigarettes or candy sticks were and probally still a popular children's sweet, the white sugary sticks with a red tip were usually quite hard to bite into unless you left them out for awhile, they were quite tasty though. These sweet cigarettes came in little boxes illustrated with either cartoon characters, Marvel comic super heroes, TV characters, etc. One of interest to the Cobwebbed Room is the House of Horror set from Barretts which came out I think during the late 70's/early 80's, featured colour cartoon artwork of monsters and horror scenes and on the back a little about the picture on the front. There were 50 cards to collect in the set of which a few examples are shown above and also 4 empty packs which were being sold on ebay, first time I had seen a picture of the boxes. Nicely illustrated boxes and cards. Can you imagine how many boxes of House of Horror you would have to buy to try and get a complete set of cards, you only get one card per box.
Posted by Paul at 10:46 pm No comments: Links to this post 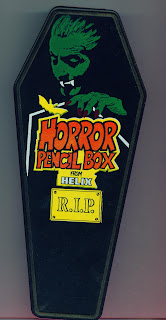 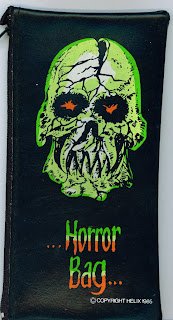 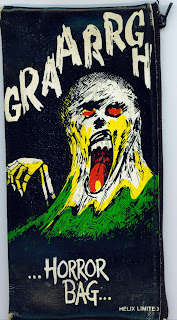 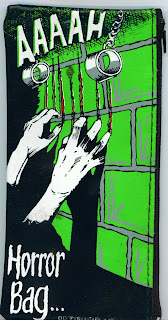 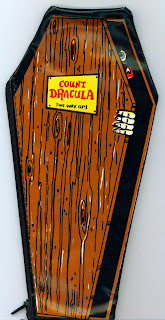 I wish I was still at school when these 'Horror Bag' pencil cases came out, these are wonderful and the sort of thing that never seems to get made anymore, well as far as I am aware. The first 4 you see here were made by Helix, the top one is made of plastic and the other 3 made of soft vinyl. The coffin shape one at the bottom I don't think was made by Helix, this is also vinyl. The vinyl Helix ones have a date of 1986 on them, not sure when they actually came out though. Helix also made other items in the 'Horror Bag' range such as a large black plastic spider pencil holder, exercise book, and pencils, there may of been others too.
Posted by Paul at 11:41 pm 6 comments: Links to this post

Well here at last is the video to the Horror Bags 'Bats' TV advert, enjoy. 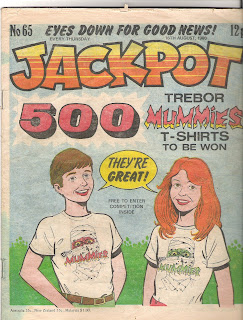 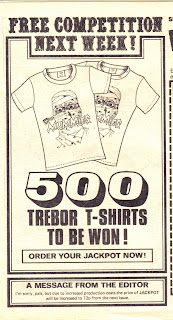 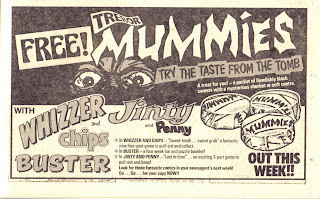 Remember the post I did on the Trebor Mummies TV advert? Well here is a competition that was held in 'Jackpot' comic, in which you could win a Mummies T-shirt as shown on the cover of Jackpot above. I really love the look of these two T-shirt designs and certainly wish I saw this competition at the time. I wonder if any of the winners still have there T-shirts. Also as the last picture shows there was a free gift of a packet of Mummies with issues of 'Whizzer and Chips', 'Buster', and 'Jinty and Penny' - 'Try the taste of the Tomb'
The issue of Jackpot above is from 16th August 1980 issue 65.

Thanks to darren.
Posted by Paul at 10:50 pm 6 comments: Links to this post 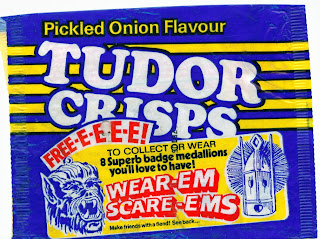 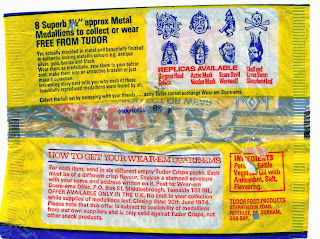 Here we have is an original empty packet of Pickled Onion flavored Tudor Crisps, featuring the Wear-Em scare-Ems promotion, in which you could collect 8 superb badge medallions by sending in 6 different empty packs. Closing date on this pack says 30th June 1974.
Medallions to collect were: 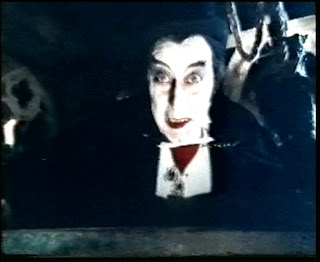 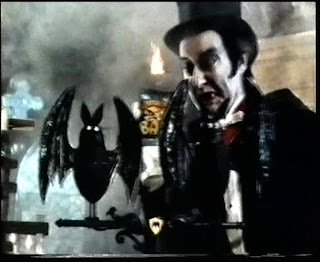 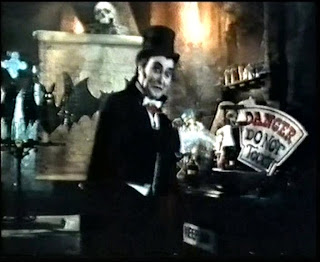 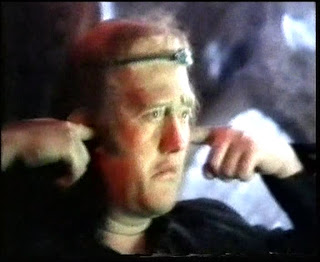 Well here is 4 more screen captures from the Horror Bags 'Bats' advert. I am hoping to try and get the advert put onto Youtube as soon as I can. I shall post a link or have it here to play as soon as I get it done. In the mean time I hope you enjoy some more pictures from it.
Posted by Paul at 11:12 pm 3 comments: Links to this post

I remember buying these back in the 80's I think, but I just can't remember the name of the actual sweets. I think they were chews of some sort and the 3 wrappers above were possibly inside of the actual wrapper. Anyone else remember these?
Posted by Paul at 10:49 pm 2 comments: Links to this post

CREEPY COMIX - KRAZY - 'The Thing from the Swamp' 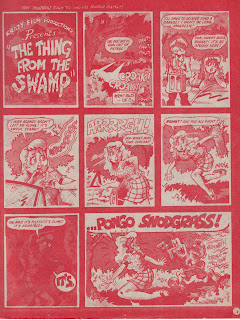 Pongo Snodgrass was a regular character from Krazy comic, here we see him in a one off story called 'The Thing from the swamp' [Krazy film productions] in a cliche film situation about a couple's car breaking down in a creepy place. The strip here Unusually printed in garish blood red which I think works really well. This is from page 9 of the 14th January 1978 issue of Krazy. 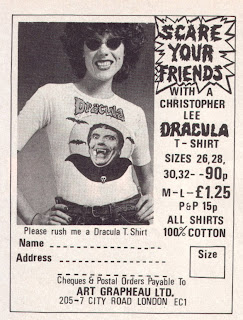 I used to love seeing this advert for a Christopher Lee Dracula T-Shirt that was usually in issues of House of hammer, Worlds of Horror, and possibly Starburst during the 1970's. The photo of the woman wearing sunglasses and the t-shirt made it all the more cool to want this, but as usual I never saw this ad untill the magazine was years out of print. I'd still love to find one of these Dracula t-shirts. Is there anyone reading this that did buy one back in the 70's?

Thanks to Rich
Posted by Paul at 10:52 pm No comments: Links to this post 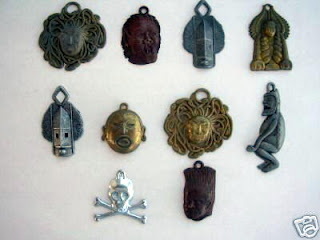 This here is a set of Tudor Crisps 'Wear-em Scare-em' medallians that was up for bid on ebay not so long ago, as you can see there are doubles of some of them. Its a shame the picture isn't better but at least it gives you an idea of what they were like. This promotion from Tudor crisps is from about 1974. I shall be putting a picture of an empty packet of Tudor crisps soon featuring the Wear-em Scare-ems promotion on the pack.
Posted by Paul at 11:08 pm 7 comments: Links to this post 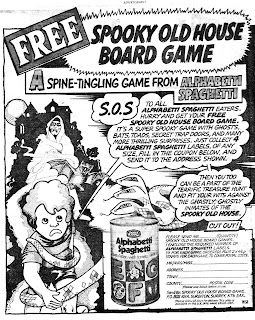 Here we have a advertisement for Crosse and Blackwell's Alphabetti Spaghetti in which you could send away for a spooky game by collecting 4 Alphabetti Spaghetti labels. Its a shame the ad doesn't show you a picture of the game. Can anyone remember this promotion that sent for the game, loved to see a picture of it.
The boy in the picture reminds me of the boy in the 'Charley Says' Public information films - 'Charley says you should never go into a haunted house without taking your Mummy or daddy'

Thanks to Rich for the scan
Posted by Paul at 11:37 pm 4 comments: Links to this post 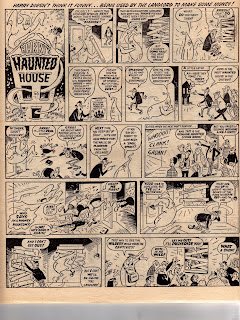 'Harry's Haunted House' first appeared in the 1st issue of Whizzer and Chips back in 1969 and continued up untill the merger with Krazy comic in 1978. This particular episode is from the 1977 Christmas issue.

Here we see Harry boarding up his windows on seeing his approaching landlord, whom Harry thinks is after his rent ['Why Don't you phone for your rent, then I could just hang up'] The Landlord though as a proposition for Harry in which they could both make money by opening up the house as a genuine haunted house, but as you can see nothing goes to plan for the landlord.

The cliche ghost [Sheet ghost] is a familiar concept in many children's comicstrips, I suppose its because it just works as its a more likely image that children would recognize as a ghost and it works better for a funny story like in the children's puppet TV series 'The Spooks of Bottle Bay'.
Thanks to John for the scan
Posted by Paul at 11:02 pm 1 comment: Links to this post 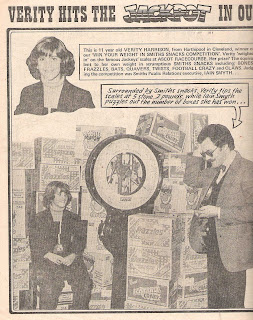 Well here is the lucky winner of the Win your weight in Smiths snacks and look not even a single Horror bag box in sight, although there is some Monster Munch boxes. Do you think the winner would of kept any of the empty packets or used the empty boxes to store things and still have them, I doubt it.

Thanks to Peter for the scan. 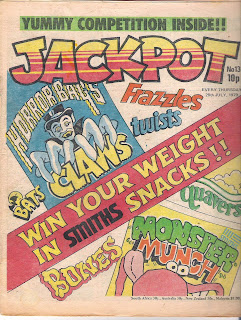 I never expected to see a cover of a comic from the 70's to feature artwork of one of the Horror Bags range, its just amazing the types of advertising and promotions that companies like Smith's would do.
Imagine being a child and winning your weight in crisps, although you probally wouldn't weigh too much, the amount of crisps or corn snacks in your weight would come to quite amount. Imagine also that you won this competition featured in the above issue (20th July 1979) and having so many boxes of Horror bags delivered to your house, all those packs and nice cardboard boxes featuring the vampire from the range on the sides. Imagine also who ever won this competition got sick of eating crisps and ending up shoving the rest of the boxes in the attic, forgotten about...I wish I was that person and I had the great idea of keeping those boxes and all the wrappers I opened, kept them all to this day...Well its a little too late now to enter said competition, typically late as usual. Oh well.

Thanks to Peter for this cover scan.
Posted by Paul at 11:29 pm 3 comments: Links to this post