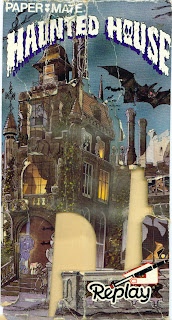 I remember buying the Papermate 'Haunted House' pen sometime during the 1980's, but somehow the actual pen was either lost or mis-placed somehow and I can't for the life of me remember what the pen looked like, not even sure if it had a graphics on it as such. I love the images on the box its just a shame that it got crushed over the years, empty boxes are not the easiest of items to keep. I have never seen one since, mind you if it is just a plain pen it wouldn't be really worth it. Anyone else remember these or still have one?
Posted by Paul at 5:51 pm 4 comments: Links to this post 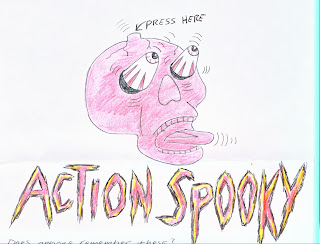 I mentioned this briefly before to see if 'Action Spookys' would jog anyone else's memory, my mate Sean who does remember them and did the drawing above wrote a little about what he remembers about them:

Back in 1970/71, when I was 7 or 8 you could buy plastic Skulls called 'Action spooky' with chewing gum at the sweet counter of your local newsagents. they came in both red and black in a spookily illustrated cardboard box. The thing I remember most about them is that when you pressed a button, the eyes popped in and out of their sockets and the mouth opended and its tongue shot out. I have done a crude drawing from memory, but bare in mind I have not seen one for 37 years. Its strange but I have mentioned 'Action Spookys' to others the same age as myself but nobody can remember them.

Thanks to Sean
Posted by Paul at 5:36 pm 6 comments: Links to this post 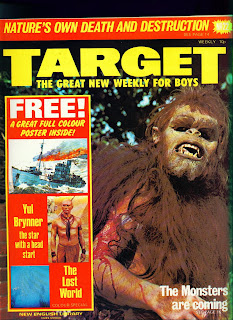 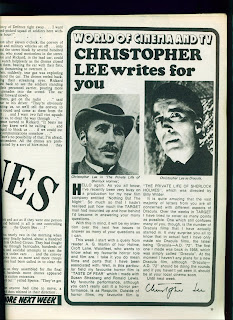 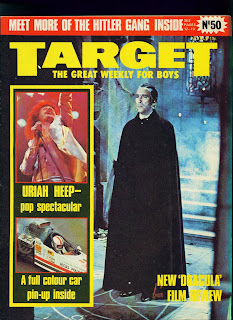 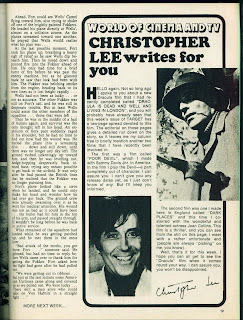 The weekly 'Target' magazine began in the early 1970's and was aimed at boys with a varied range of interests. Published by New English Library, the issues would cover what you probally would expect of a boys magazine such as: Sport, the natural world, stories of war and bravery, cars etc. Other subjects included Pop music, boys fashion, profiles of film stars and films etc. Two regular comic strips were 'Bovver Boy' basically a boy skinhead, and Carrington- Crimebuster.
Dave Lee Travis hosted a regular colemn about pop music and would you belive the actor Christopher Lee also had a regular colemn called World of Cinema and TV, which was basically a platform to talk about his current activities in the film and TV world. Target would also do features on horror films and effects in horror films as well as profiles on their stars. An average issue would run to about 32 pages, a lot of which were in colour, sometimes a double spread poster was also included. I am not sure how many issues were published, certainly into the 50s.
As you can see above are 2 issues that have a horror themed cover and the Christopher lee colemn from those issues.
Posted by Paul at 7:24 pm 15 comments: Links to this post 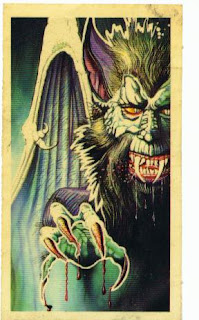 These scary stickers, one of which you see here, came free in boxes of Weetabix, I believe in the late 1980's. There was I think about 5 or 6 in the set and they all glowed - in - the dark. I have another 2 somewhere which I'll try and dig out. The stickers came in a cardfold out which also showed the others in the set. The two pictures of the Vampire and The Werewolf short comicstrips were featured on the backs of the Weetabix boxes. There may of been others in these 'The Weetabix and the...' short comicstrips. You could get some really cool free gifts with packs of cereals, shame that is longer the case.
Posted by Paul at 11:21 pm 9 comments: Links to this post