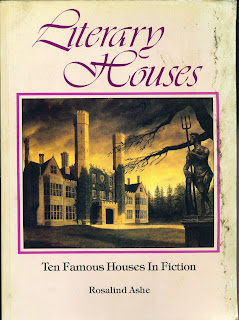 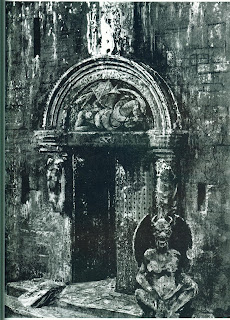 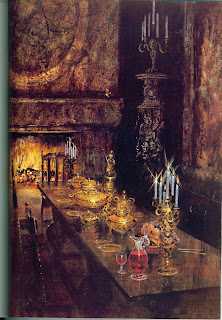 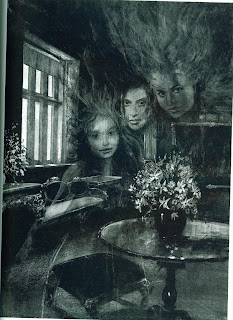 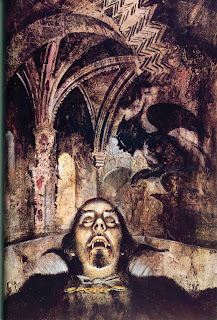 Here we have a non-genre book that is worth mentioning because of particular chapters on the genre. 'Literary Houses' by Rosalind Ashe is a beautiful illustrated book that describes 10 famous houses in fiction, describing a particular house and its interior from a classic novel and illustrated beautifully in colour. Some of these I will be including here in the Cobwebbed Room either because it is appropriate or because of the atmospheric illustration. Here as you can see above are the illustrations from the chapter on Dracula.These were illustrated by John Rose and I think really capture the creepy and sinister atmosphere as described in Bram Stoker's novel. The other books covered in 'Literary Houses' are 'Rebecca', 'Great Expectations', 'The Picture of Dorian Grey', 'The House of the seven gables', 'The Great Gatsby', 'Northanger Abby', 'Jane Eyre', 'Howards End', and 'The Hound of the Baskervilles'. I shall only cover 'Hound of the Baskervilles' and 'Great Expectations' [Only because of the cobwebbed shrewn Miss.Haversham's house]. 'Literary Houses' was published in 1982 by Paper Tiger. As far as I am aware there was 2nd book of Literary Houses too, not sure what novels were covered in this edition.
Posted by Paul at 10:57 pm 4 comments: Links to this post 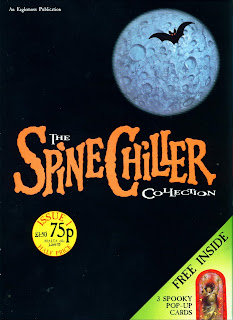 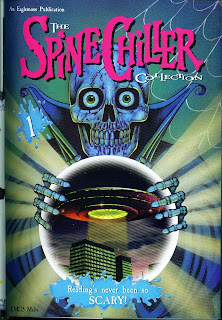 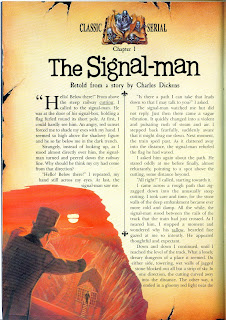 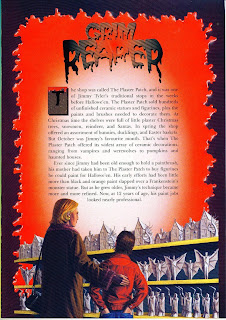 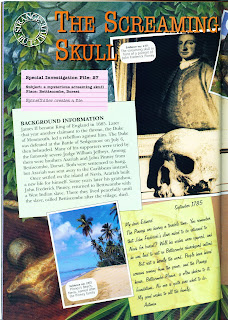 Throughout the years here in England, there have been hundreds of weekly or fortnightly magazines known as Partworks on any given subject. Of interest to readers of The Cobwebbed Room there have been a few with a supernatural/horror theme such as 'The Unexplained', 'Man, Myth and Magic', 'Fate and Fortune', 'The X Factor', and 'The Horror Collection'? 'The Spinechiller Collection' was another supernatural/horror themed publication which was aimed at a younger reading group. Published by Eaglemoss in 1998/1999. The first issue as with most partworks was sold for an introductory price of 75p, all issues thereafter would be priced at 1 pound 50 per issue. With the first issue which came in a card folder also contained a pack of 3 Spooky pop-ups [There were 30 of these pop-ups all in all to collect throughout the magazines run, these were intended to be used to play a game called 'Zap the Spook']. Issue 2 came with a free binder which would hold 15 issues and another spooky pop-up, other free gifts apart from the pop-ups were a skull hologram sticker with issue #5, a card Dracula bookmark with issue #6, and a small sheet of spooky tattoos in issue #11.
The Spinechiller Collection's contents were illustrated with artwork and photographs, and written work consisting short stories, supernatural factual accounts and Unexplained phenomena. Contents of each issue consisted of a Scary Story which were originally published in one of the following short story collection books:
'Super Scary stories for sleepovers' (1995)
'More Scary stories for sleepovers' (1992)
'Even more Scary stories for sleepovers' (1994)
'Mega Scary Stories for sleepovers' (1996)
'More Super Scary stories for sleepovers #6' (1995)
'Even more Super Scary stories for sleepovers #6' (1995)
'Still more Scary stories for sleepovers' (1993)
'Scary stories for sleepovers #8' (1997)
'Mega Scary stories for sleepovers #7' (1996)
'Bone chilling tales of fright' (1994)
'Still more Bone chilling tales of fright' (1995)
'More Scary stories for when you're home alone' (1996)
'Scary stories for stormy nights' (1995)
'Even more Scary stories for stormy nights' (1997)
'Scary stories from 1313 Wicked Way' (1996)
'Darkness Creeping' (1995)
'Our Haunted World' covered stange and spooky stories from around the world, I am not really sure what the next part was called but it contained a 2 page story in comicstrip format that were the sort of stories passed from a friend of a friend kind of like Urban Myths, 'Strange but True' covered case documents about srange phenominia, events etc, then we have the 'Creepy Puzzles', a 'Classic Serial' featured a condensed version of a classic horror or ghost story which each story ran over 2 to 3 issues, here are those stories that were featured:
'Phantom of the Opera' - Gaston Leroux
'The Portrait Painter' - Charles Dickens
'Dr.Jekyll and Mr.Hyde' - Robert Louis Stevenson
'Squire Toby's Will' - Sheridan Le Fanu
'The Old Nurse's Story' - Elizabeth Gaskell
'The Real and the Conterfeit' - Mrs.Alfred Baldwin
'The Shadow' - E.Nesbit
'Croul's Ghost' - Sheridan La Fanu
'Wolverdon Tower' - Grant Allen
'The Ghost Chamber' - Charles Dickens
'The Dead Sexton' - Sheridan La Fanu
'Dracula's Guest' - Bram Stoker
'The Signal Man' - Charles Dickens
'The middle toe of the right foot' - Ambrose Bierce
'The Open Door' - Charlotte Riddell
'The Pit and the Pendulum' - Edgar Allan Poe
'The Canterville Ghost' - Oscar Wilde
'Frankenstein' - Mary Shelley
'A Christmas Carol' - Charles Dickens
'Dracula' - Bram Stoker
'The Violet Car' - E.Nesbit
'The Spectre of Doom' - Bram Stoker
'The Stranger' - Ambrose Bierce
Finally 'The Unexplained' looks into bizarre unsolved mysteries. Throughout the 60 issues of The Spinechiller Collection, a number of artists worked the covers, contents and free gifts. I would say that all the illustrations are stunning and often very creepy throughout. Here is a complete list of those artists:
Simoni Boni
Kev Walker
G.Coppola
Darren Pattenden
Lee Gibbons
Will Simpson
John Higgins
Tony Smith
Paul Johnson
Una Fricker
David Millgate
Leo Hartas
Jerry Paris
David Burtchum
Steve White
Ian Atchinson
David Wyatt
Christyan Fox
Kev Hopgood
Carol Kemp
Robin Smith
Baz Rowell
Christine Hock
Justin Wyatt
Garry Leach
Harvey Parker
John Lupton
Luis Rey
Douglas Carrel
Ken Stott
Luigi Galante
Julian Gibson
Andrew Wheatcroft
Barry Jones
Alwyn Talbot
Al Davison
Stephen Player
Bob Harvey
The last issue contained an index covering all issues, there were no puzzles or 'The Unexplained' in this issue. A subscription would include a free Spinechiller Collection T-Shirt.
Posted by Paul at 10:16 pm 31 comments: Links to this post 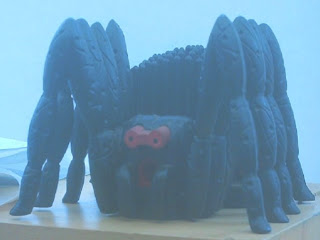 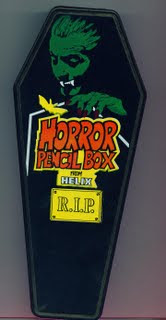 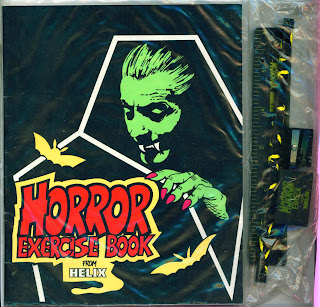 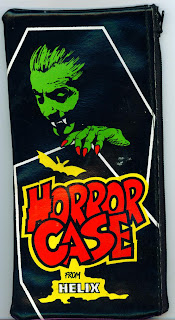 My other post which featured horror themed Helix pencil cases, 3 of which were in the range of pencil cases known as 'Horror Bag',the vinyl coffin shaped pencil case and the plastic coffin shaped pencil case which I have added here again in this post, because this is where it should of gone being part of the Horror vampire range by Helix. Another of Helix's horror themed stationary which came out sometime during the 1980's featured a green faced vampire on the products [see above] and the word Horror and what that particular item was, here as you can see is the Horror Case [Vinyl pencil case], and the Horror exercise book which also came with ruler, pencil sharpener and rubber. The black spider was also part of the Horror range released by Helix at the same time. This plastic spider had a number of functions; the spiny back was a pencils/pens holder, the eyes a rubber, and the mouth doubled as a pencil sharpener. I don't remember if there were other products in the Horror range, but as far as I am aware these 4 were the only ones, unless anyone else knows of anything else in this Helix range.
Posted by Paul at 11:18 pm 8 comments: Links to this post