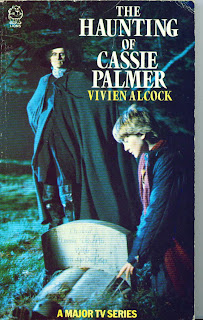 The TV tie-in sections will concentrate on those spooky shows that were shown during the 60's, 70's, and 1980's, of which a vast number were made either as a serial, anthology or one offs. I think that British TV made some of the most entertaining and spookest shows on TV, there was classic dramas from the likes of 'Supernatural', 'Classic adaptations of famous horror stories such has 'Dracula', 'Frankenstein', 'Fall of the house of Usher', 'Carmilla', etc featured in 'Mystery and Imagination'. Many anthology shows were made during the three decades, not all would feature a tie-in book. Titles included: 'Shades of Darkness', 'Dead of night', 'Menace', 'Shadows of fear', 'Beasts', 'Hammer house of horror', etc. One of most popular children's supernatural anthology series 'Shadows' was also one of the longest running. Other classic children's supernatural series included 'The Clifton house mystery', 'Nobodys house', 'Children of the stones', 'The Watch house', 'The Owl service', 'Chocky' 'Moon dial', 'Lizzie Dripping', 'Secret world of Polly Flint', etc and Comedies such as 'Ghosts of Motley hall', 'Rentaghost'.

Some supernatural series stories were based on true stories, series such as 'Worlds beyond', 'The mind beyond', 'Leap in the dark', and 'West country tales'.

The first tie-in I want to show you is from the 1982 six part series 'The Haunting of Cassie Palmer', which starred Helen Probyn as Cassie, Geoffrey Rose as Deverill [both featured here on the cover], and Elizabeth Spriggs as Mrs.Palmer. The show was made by TVS for ITV and directed by Dorothea Brooking. This children's supernatural drama tells the story of Cassie Palmer the seventh child of a seventh child, who inherits her mother's psychic powers. Her mother is a not so successful medium who wants to teach and develop Cassie's psychic powers of which Cassie doesn't want to except she has these powers. On a dare she attemps to call upon a spirit in the local graveyard with her sister and brother. Instead of a little girl, Cassie instead raises the spirit of a tall gaunt man dressed in black named Deverill, whom Cassie is the only one who can see him and speak to. Deverill begins to haunt Cassie, appearaing along side her while walking from school etc. She befreinds him, but wants to know what Deverill's purpose is.
Posted by Paul at 9:08 pm 1 comment: Links to this post