I have had this Spookies insect and packaging for many many years, I have no idea what year but I would guess sometime during the 1980's. The Centipede isn't as flexible as it was originaly but it still glows in the dark. According to the packaging it says that when the spookies becomes less sticky you can wash it in warm soapy water, will have to try that.. Apart from the one you see here and the 2 pictures on the card of a skeleton hand and skeleton, I don't know if there were any other Crawling Spookies. Instructions state that you throw the Spookies against a window or other shiny surface and then the spookie will crawl down the surface. I just love what it says on the packaging - 'UNBELIEVABLE! Hold under a electric light for 15 seconds,switch off the light then throw against a wall and frighten your freinds'/Night toy for kids and adults/Must be seen to be believed. Would love to hear from you if you have any of these crawling Spookies especially any that haven't been mentioned here.
Posted by Paul at 10:24 pm 5 comments: Links to this post 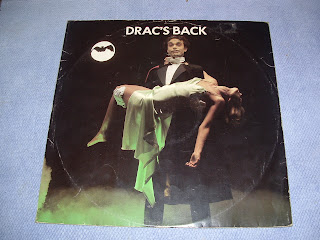 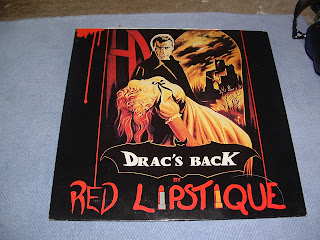 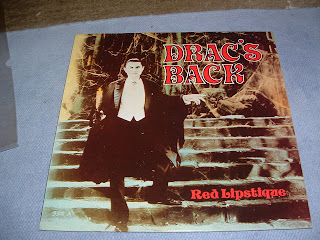 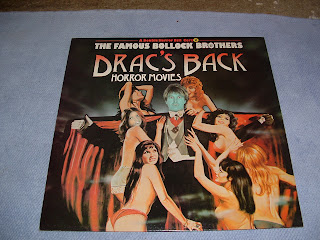 I love a good novelty monster/horror tune, something to lift the spirits, raise the dead or just for a little ghoulish fun. Most of these type of records were made in the USA but here in the land of Cushing and Lee, we have 4 copies of the hit single 'Drac's Back', first by Andy Forray, then Red Lipstique, and last but not least The Bollock Brothers, really like the covers on these. I'll do some more digging for more tunes from the British Tomb.
Posted by Paul at 11:29 pm No comments: Links to this post