'Pages from some of my scrapbooks' 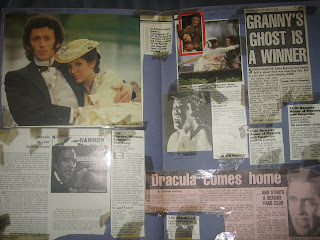 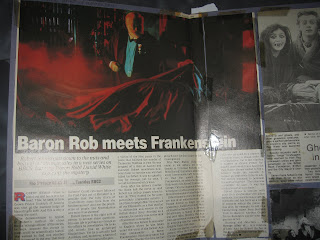 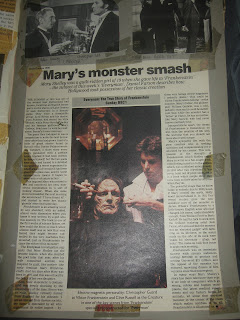 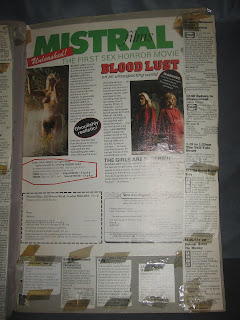 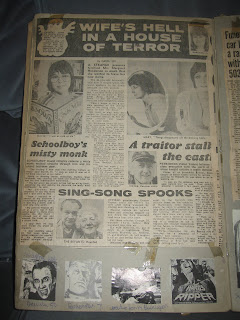 I began putting together scrapbooks way back in the late 70's/early 80's of all things connected with horror films, TV series, ghosts, vampires etc etc. Anything I could find connected with the genre I cut out and pasted in my scrapbooks. I still have many more clippings that are loose and need to be sorted out. I don't do it so much these days, probally because I don't seem to see many decent articles etc in non-genre publications such as sunday supplements as I used to do. Anyway hope you see something on these few pages that interest you, I tried to choose clippings that are more relevant to The Cobwebbed Room.
Posted by Paul at 9:51 pm 2 comments: Links to this post 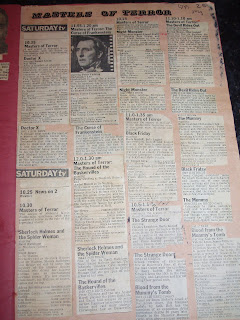 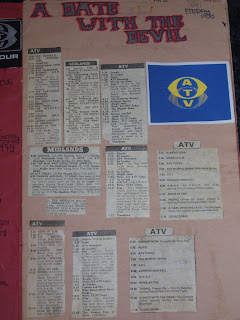 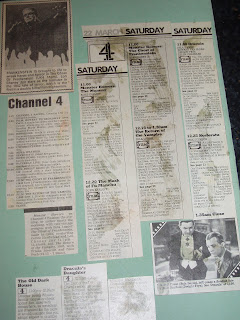 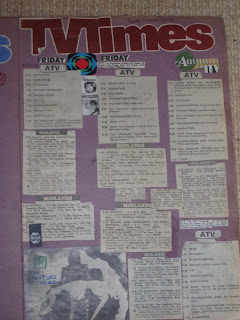 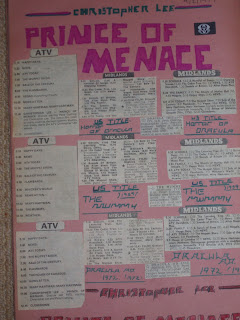 Continuing from the previous post here are some more photos that Greg sent in from his scrapbooks. This time from BBC's 'Master of Terror', ATV's 'A Date with the Devil', Channel 4's 'Monster Horrors', ATV's 'Creature Features', and ATV's 'Prince of Menace'.
Posted by Paul at 10:03 pm 4 comments: Links to this post 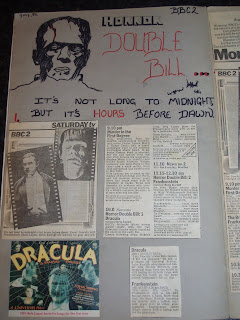 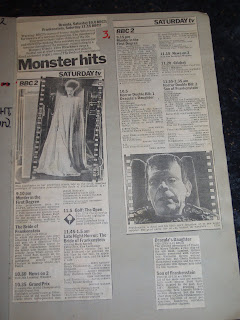 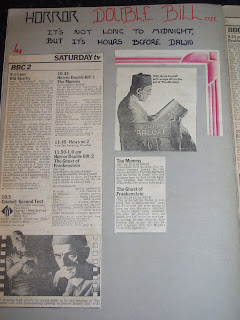 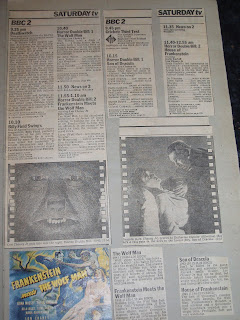 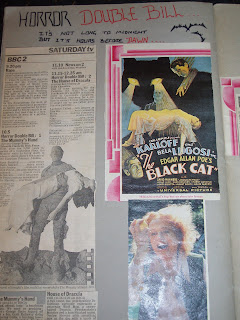 Remember the time when TV stations would put on a horror double bill or have a season of classic horror films on late at night? These were quite a regular thing during the 1970's and 1980's especially BBC 2 and ITV stations such as Anglia [ATV], I mention Anglia because out of all the ITV channels this region seemed to put on quite a lot of the horror double bills/horror seasons and according to Greg whom sent me the photos you see above really did a great job in presenting these classics of the macabre. Remember when ITV had interval captions that popped up before and after the advert breaks which gave the title of what was on and were usually nicely illustrated/designed?, the horror double bills were the highlight of a usually friday night for most horror film fans, myself included; and if you were one of those that were really too young to watch these films or had to go to bed early, then it was either creeping downstairs while Mum and Dad were asleep and putting the TV on and tuning the sound down very low so you wouldn't wake your parents, or hopefully persuading them to let you watch them anyway [after all there was no school the day after]. Anyone else also tried to tune in the TV to other ITV regions? If you did then you know what it was like you see in the TV Times that another channel that you don't get in your area are showing a horror film that you really want to see and so you try and tune the TV in to hopefully get that channel, more than likely when you do it is either a very poor snowy picture, poor sound or both. This didn't deter you though, no matter how bad the picture or sound was just having that channel on with the film you wanted to see was good enough, as you know this was before video recorders [or they were too expensive to buy]. It was more of a thrill back then because you never knew when these films would be on again, if at all. The above photos that Greg kindly sent are pages that he put together in several scrapbooks of clippings from various horror double bills and horror film seasons during the 1970's/80's [The ones above from BBC 2's Horror Double Bill] fantastic that he kept a record of these memorable TV highlights. Should hopefully have a few more to put on soon too. If there is anyone else that kept a scrapbook or 2 of clippings, pictures, articles etc about horror films/TV/fiction etc and are willing to share here then please do feel free to send some pictures, I'll get some of mine scanned or photographed too and post them here in this dusty old cobwebbed room.
Posted by Paul at 9:47 pm 13 comments: Links to this post 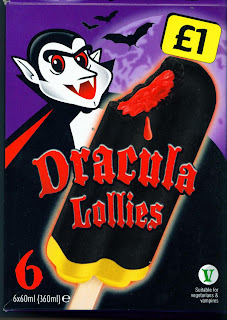 Anyone that fondly remembers the 'Dracula's Deadly Secret' Ice Lollie back in the 1970's [See my post on these] will be pleasantly surprised that they are back again but it seems only from the freezer shop 'Iceland' and 6 Lollies for £1 they are a bargain. The only difference that I can make out compared to the original Deadly Secret Ice Lollies is that the blood red gooey stuff in the middle is now only strawberry ice but everything else is the same, the black cola ice and ice-cream at the bottom and they taste very nice. The only gripes I have is that I don't think that the Dracula illustration is as good as the original and that the Lollies don't have illustrated wrappers just clear plastic. There are a couple of nice touches on the box - 'Produced in Darkest Netherlands' and 'If you have any complaints or comments then please contact the Count at Castle Belfield...' In Spain they have been making the Dracula lollies for a number of years and they come in a nice illustrated wrapper. So put in your non-sensitive fangs and get down to Iceland for a nostalgic treat.
Posted by Paul at 9:38 pm 1 comment: Links to this post 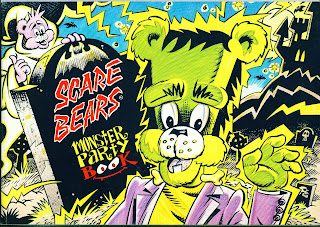 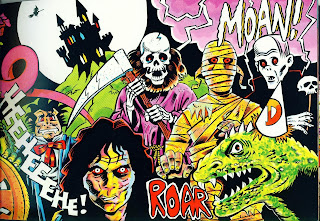 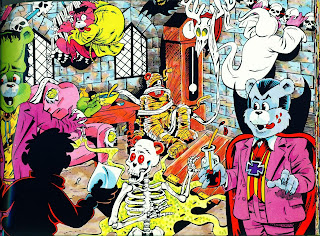 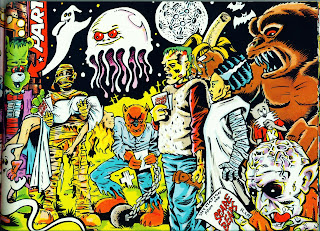 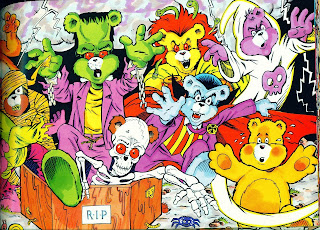 Following on from the previous post here we have a beautifully illustrated Scare Bears book published in 1988 by Cartoon Aid. I haven't read the actual story yet but the bits I have read do seem to be quite funny and ghoulish at times. There are 60+ pages of story and illustrations. Each 2 pages has the story on the left and picture opposite. The pictures has you can see above are really nicely illustrated by Mike Gibas and Caspar Williams, these are wonderful to look at as there are so many different things going on in the pictures, not sure what the age this book is aimed at but some of the illustrations are quite grisly; It does say on the back cover 'Not Suitable for Adults!', which I think is a nice comical addition to the book as well as having comments on the back from such creatures & Macabre know-alls as Christopher Flea [like it], Graverobber's Quarterly, Doctor Inthahaus, Werewolf World, etc. 'The Scare Bears Monster Party Book' is devised by Graham Cooke and words by Leslie Kett.
Posted by Paul at 8:59 pm 10 comments: Links to this post 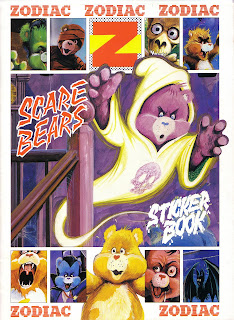 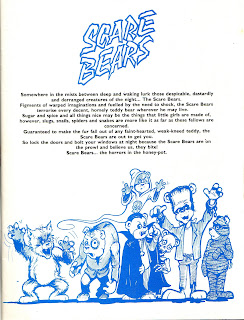 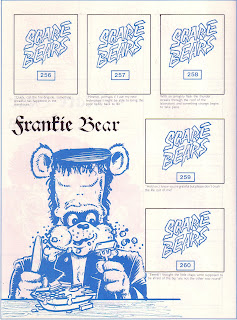 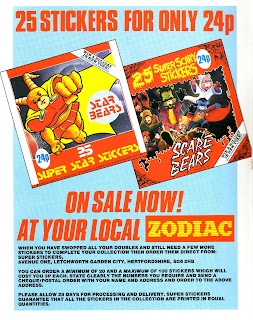 Anyone remember these bears in the form of classic movie monsters like Frankenstein's Monster, Dracula, The Mummy, The Wolfman, Quasimodo etc? Not sure of the actual names of the Scare Bears apart from Frankie Bear [See above]. The pictures you see here were kindly sent by a visitor to the Cobwebbed Room, thanks Pete. This sticker book came out during 1985/1986 and was available from 'Zodiac' toy shops, not sure if they were also avalible from newsagents as well. The stickers of which over a hundred had to be collected were available on the counter at the Zodiac toy shops for 24p a packet; also included with the Scare Bears stickers were stickers of the Zodiac bears which could be stuck in reverse side of the sticker book, the Zodiac bears were the signs of the Zodiac but apparently the artwork wasn't has good as the Scare Bears ones. I think it does now seem likely that the stickers were only available from Zodiac toy shops giving the subject matter of the other bear stickers. I think that the illustrations in the sticker album are nicely done, like the werewolf one [Wear Bear?] and the Skeleton with the bear ears. Would be nice to see what the stickers were like if anyone has any then please do let us know. I am guessing that the album and stickers may be difficult to come across if they were originally only available through 'Zodiac'

When I manage to get my scanner working I will scan some pages from another Scare Bears related item, a book called 'The Scare Bears Monster Party Book' which was published in 1988 which is nicely illustrated in colour of the Scare Bears and guest appearances of the real movie monsters [well in cartoon form]. Anyone know of any other Scare Bears Wares?
Posted by Paul at 9:49 pm 1 comment: Links to this post

The House That Dripped Blood (1971) Trailer

Posted by Paul at 10:29 pm No comments: Links to this post

Posted by Paul at 10:24 pm No comments: Links to this post

Posted by Paul at 10:22 pm No comments: Links to this post

Posted by Paul at 10:21 pm No comments: Links to this post

Tales From The Crypt 1972 trailer

Posted by Paul at 10:19 pm No comments: Links to this post