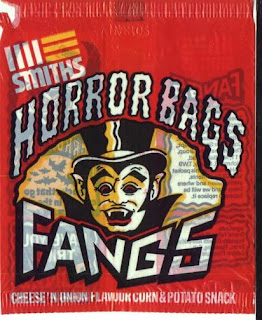 Saw this while searching on the internet, not really sure who put this picture on, but I just had to share it with you. Looks in great condition. First time I have seen a photo of a Fangs packet, I think that Fangs was probally the first of the series of Horror bags. Now all we need now is a photo of the Claws packet and a Bats packet.
Posted by Paul at 11:46 pm 6 comments: Links to this post 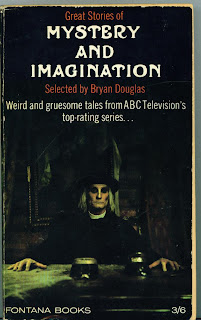 Made by ABC television, 'Mystery and Imagination' was a TV series of period dramas that adapted stories and plays from some of the classics of horror fiction[see episode list below]. Classics by such authors as Bram Stoker, Mary Shelley, M.R.James, Sheridan Le Fanu, Oscar Wilde, Edgar Allan Poe etc. The series was filmed in black and white untill the last 3 episodes which were in colour. Some of the early episodes were linked by a character Richard Beckett played by David Buck. Some of the finest actors appeared in Mystery and Imagination such as Denholm Elliott ['Dracula'], Ian Holm ['Frankenstein'], Freddie Jones ['Sweeney Todd'], Gordon Jackson ['Carmilla'], etc.

It is unfortunate that many of the episodes are believed to be lost, the only known episodes to exist are the following 8 episodes - 'The Fall of the House of Usher', 'The Open Door', 'Uncle Silas', 'Frankenstein', 'Dracula', 'The Suicide Club', 'Sweeney Todd', and 'Curse of the Mummy'.

The TV tie-in of the series was published in 1966 by Fontana books, the stories were selected by Bryan Douglas. 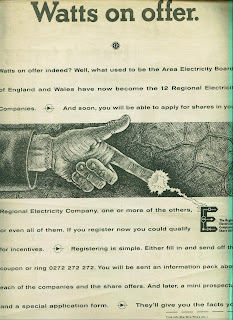 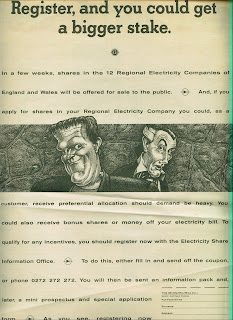 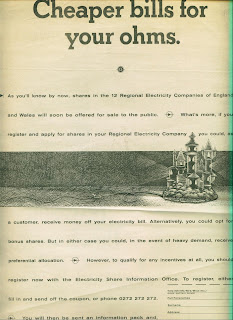 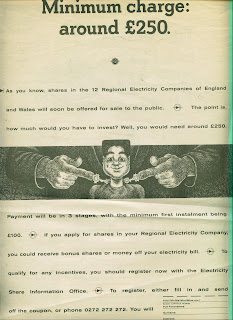 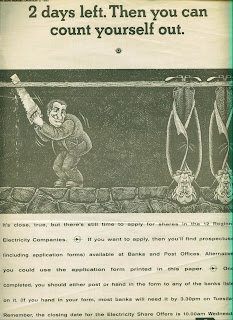 I mentioned briefly in one of my first posts about the series of Television adverts which featured Casualty's Clive Mantel as playing the Frankenstein Monster, these were adverts for Electricity; that the general public had the chance to buy shares when the main Electricity company was separating into 12 regional electricity companies. The TV ads also featured other monstrous characters such as the Bride of Frankenstein, a son, Hunchback, there may of been others.
Here are 5 of the newspaper advertisements that appeared during the time, about 1991.
Posted by Paul at 7:16 pm 2 comments: Links to this post 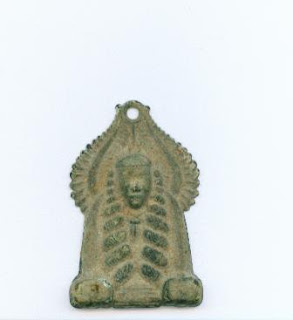 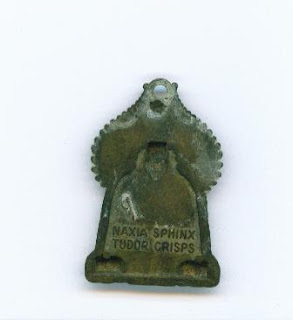 I had never heard of Tudor Crisps Wear-em Scare-ems until one of my friends told me about them. He had just the one which you can see here, this one is the Naxia Sphinx. Wear-em Scare-ems are made of metal and made to look old, they have a hole at the top in which you could thread a cord through it to wear round your neck. Not really sure what others were available, my friend did mention a Werewolf which was the one he wanted, but when you sent for them you just got what ever they sent you.

If anyone knows of any others in the series or have any magazine/comic ads then we would love to see them.

Thanks to Sean
Posted by Paul at 7:02 pm 4 comments: Links to this post