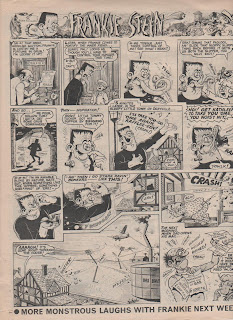 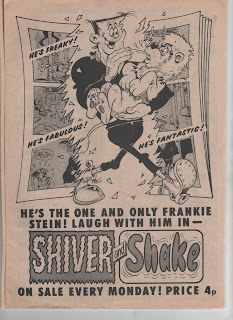 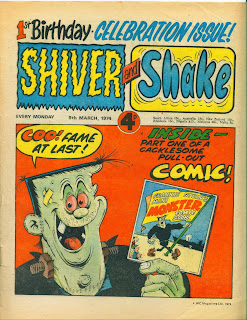 The Creepy Comix sections of The Cobwebbed Room will feature the several spooky type comicstrips that appeared in British comics during the 1960's, 70's, and 80's. Although there were not that many comics on the British market that catered for the horror fan, there were plenty that did feature a spooky/monster type comic strip. Many of these comic titles were published by the company Fleetway, a leader in comic publishing. Titles of which included Whoopee, Whizzer and chips, Buster, etc. The two titles that Fleetway did publish with a monster theme were Shiver and Shake and Monster Fun, both of which were short lived.

'Frankie Stein' first appeared in 'Wham' comic published by Odhams in 1964. Frankie Stein would eventually be a regular in 'Shiver and Shake', also apperaring in 'Monster Fun' As well as the two Fleetway titles;his apperances were also so seen in Monster Fun and Shiver and Shake annuals, Whoopee, and also having his own Whoopee holiday specials.

Frankie Stein was first created by comic artist Ken Reid whose original drawings of Frankie looked a little darker in style untill artist Robert Nixon took over the design of the character and made the comicstrip character more fun looking showing the innocence of the character. Another reguliar character in the Frankie Stein comicstrips was Professor Cube whom Frankie referred to has 'Dad'. Cube was always finding ways of trying to himself of his creation. The Professor also featured in his own strips in the specials and annuals.

Take a look at the difference in styles of Ken Reid's Frankie Stein and Robert Nixon's.
Posted by Paul at 1:02 pm 2 comments: Links to this post