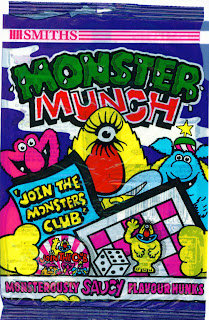 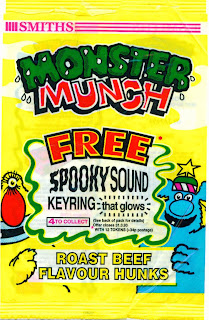 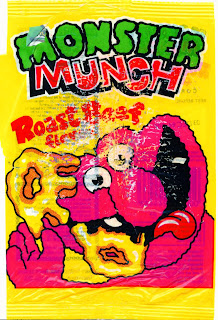 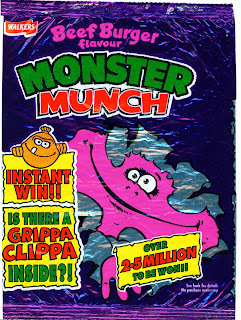 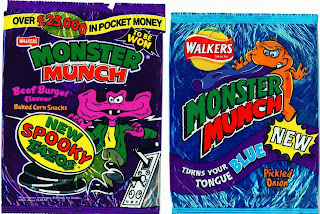 Here we have another 6 different Smiths and Walkers Monster Munch packets, 5 of these are from the 1990's and the last from 2001.
First up is a packet from 1992 in which the front is promoting the 'Monsters Club' in which by sending a cheque or postal order for 1 pound 99p you got Whacky Monster badge and a Mega-Monster board game. The 2nd packet's (1993) promotion is for a Spooky Sound keyring that glows, these came in fluorescent colours and by a press of a button the keyring gives out a different spooky sound and eerie glow. There were 3 monster keyrings to collect - Pink Monster with spooky screech, Blue Monster with a haunting ghost sound and Green Monster with Naughty Giggle, there was also a Witch keyring to collect which was purple and the sound was a wicked cackle. The 3rd packet from 1994 as you can see is just a normal Roast Beef flavor packet. The 4th packet from 1995 has the promotion of the Grippa Clippa which were found in some packets if you were lucky. There were 3 to collect, a pink, a blue, and a orange monster which you gripped onto whatever you could. The 5th packet's 1997 promotion is for Spooky Tazos which were found in some packets, I think there were 10 to collect, also you could also be lucky and find a Tazo that on the back would be a lucky winning one in which you could either win 5 or 10 pounds. Lastly here we have a packet from 2001 for the New Blue pickled onion flavor in which although the snack looked normal, it wasn't untill you started eating it that it made your tongue blue, brilliant gimmick.
Posted by Paul at 10:28 pm 9 comments: 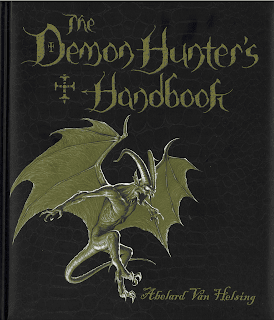 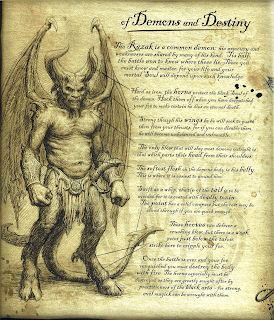 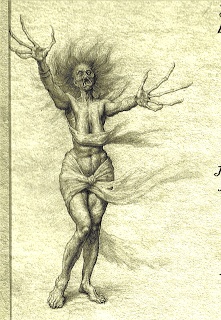 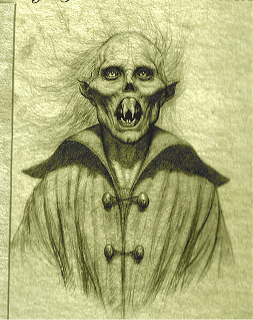 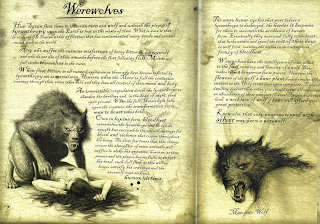 I don't really know much about this superb book apart from as you can see from the pictures that it is printed in the style of a very old journal with handwritten text and accompanying drawings. From the sample scans that were sent to me, there are sections on a particular demon/monster of which the text describes what they look like, their characteristics, how to destroy them etc. It is a beautiful looking book, from the superb cover to the brilliant illustrations of the demons/monsters and the beautifully written text of which is written as though by a real demon hunter whom has seen them and experienced them first hand.
Posted by Paul at 10:24 pm 6 comments: 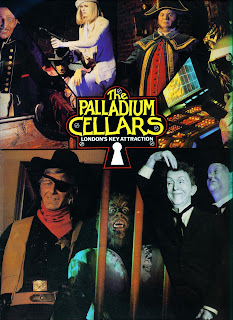 Anyone interested in the Palladium Cellars that closed down during the 1980's [see my post on this] are invited to have a look at a new facebook page that will concentrate on this wonderful waxworks attraction, there are a pictures from the brochure and some rare black and white pictures of some of the exhibits. Gavin who began the page very recently will welcome any interesting contributions regarding the Palladium Cellars. 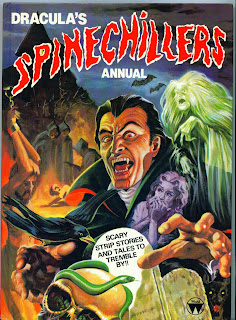 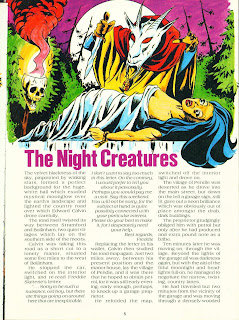 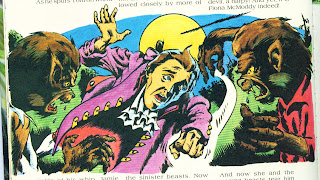 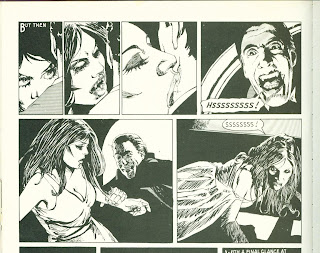 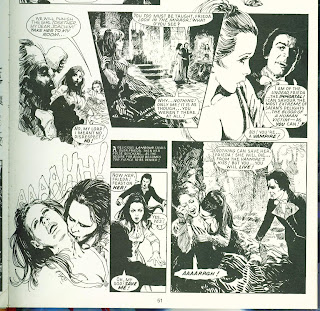 This annual was published by World International Publishing in 1982, it contains short stories with illustrations, these are 'The Night Creatures', 'The Frightening tale of Jamie McGregor, and 'The Fiery Point Incidents', also the annual reprints the comic adaptations that first appeared in issues of the British horror magazine 'House of Hammer', the first is an adaptation of Hammer film's 'Dracula' a.k.a. Horror of Dracula which first appeared in issue 1 of House of Hammer, the second comic adaptation is of Hammer's 'Twins of Evil' from issue 7 . Rather than sticking to the original black and white originals, the comic adaptations half way through are printed in garish colour, not individual parts of a picture but the whole frame given it a kind of tinted look, which I think kind of spoils the flow. The annual is a slim 64 pages which also has a page about Vampire Lore, macabre miscellany, and a 2 page game called 'Dracula stalks his prey!' 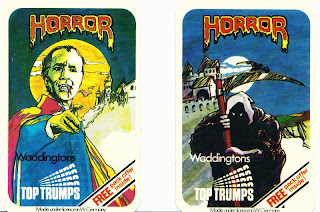 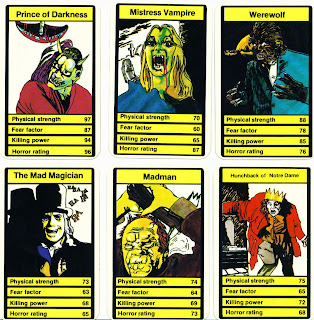 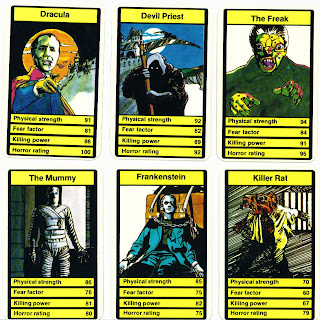 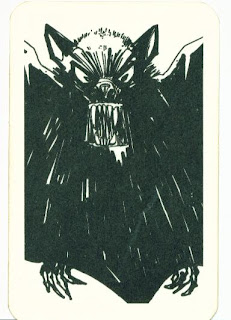 Top Trumps was and still is I guess a very popular card game, essentially all they are is a set of cards of a certain subject [usually cars, planes, boats, ships, bikes etc] which has a picture of whatever car, plane etc, the name of the subject and a list of categories such as MPH [miles per hour], HP [horse power], etc for cars, then it gives those sums for that category. You deal the cards out among the players who keep just the top card facing up and the first player picks a category and says it out loud to the next player, who ever has the highest wins the other person's card and you just carry on until one person wins all the cards. Simple but addictive, plus you learn something that may or may not impress someone. Whenever we played Top trumps it was always the way you asked if you wanted to play 'Do you wanna game of Top Farts?' or a game of Top [followed by a raspberry noise].

The Horror Top Trumps were 2 sets [Dracula and Devil Priest], obviously the same format as other Top trumps but this time we had cool monsters such as The Fiend, The Beast, Thor, Creature from the Black lagoon, Lizard Man, Death, The Ghoul, Man eating Plant, Phantom of the Opera, Frankenstein, Headhunter, Circus of Death, The Risen dead, Maggot, Wolfman etc. Some of the monsters were made up, but others were familiar horror characters or monsters from horror films. Some of the images taken from horror films were sometimes called something else on the cards such as The Reptile from the Hammer film was called here The Freak, or there is an image of Lon Chaney snr as the Vampire from London after midnight, here he his called The Mad Magician, not that it really matters. The categories for the Horror top trumps are Physical strength, fear factor, Killing Power, and Horror Rating.

Above we see the 2 covers of both sets, examples from both sets and the back of a card.
Posted by Paul at 10:25 pm 15 comments: 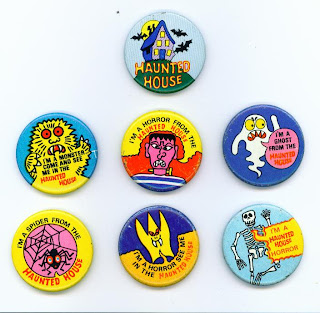 I have a vague memory of these lollys from Lyon's Maid, I seem to remember the pictures that were printed on the actual lolly. The Lyons website [http://www.kzwp.com/lyons/group2.htm] is a wonderful site that covers all products made by the famous company and has some great pictures too. This is the only place that I could find anything on the Haunted House ice-Cream lolly, it says that Haunted House came out in 1973 and was priced 4 pence. The printed pictures on the lolly included Frankenstein's Monster, Spook, Skeleton, Spider and web, Bats, Witch, and A Creature. The pictures were printed in pink, orange, red, green, and blue and were edible. The Pictures above show the Haunted House wrapper and 7 promotional badges, not sure how many there were in a set, but I would guess at least 8 - 10.
Posted by Paul at 10:40 pm 10 comments: 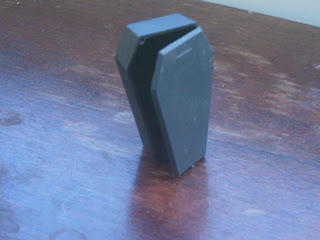 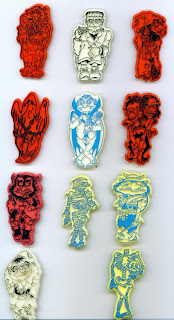 Similiar in a way to the 'Bone Shakers' coffin and candy product that I featured not so long ago, these small black plastic coffins also contained candy/sweets of somekind, can't remember what they were like, all I know is that they were very hard sweets, maybe boneshape? Anyway in each little coffin along with the sweets was a plastic badge which could come either in black on red, black on white, blue on white, or blue on yellow. The examples above show one of the black coffins and the different variations of colours of the characters which include:
from top left to right

Not sure of the exact names of some of the characters, just going by what they look like. I have no idea how many different characters there were or how long the coffins/badges were on sale and what sort of packaging they came in. These were available in the shops sometime during the early 1980's.
Posted by Paul at 10:27 pm 17 comments: 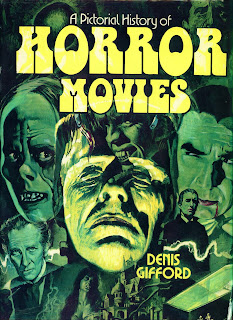 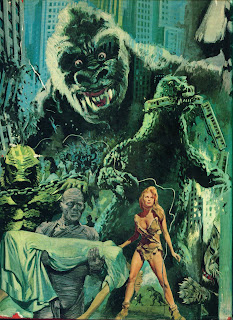 One of the first horror film books I bought was this seminal classic from film critic and writer Denis Gifford, this book bought many entertaining hours either reading or just staring at the wonderful stills featured inside, this is one of the attractions of this 216 page large hardback book, it has 350 black and white stills with a further 16 in colour, even the index featured stills.
The text is easy to understand and to take in, none of your analyzing and picking apart;this is just a great book telling the history of the horror film, from the very early silents, classics from Universal Studios, Hammer films, A.I.P., and also covering horror films from around the world. Many rare and forgotten films are also mentioned and illustrated throughout the book.
One of the attractions of the book is the fantastic cover art [see pictures above of front and back] by artist Chantrell [anyone know anything about this artist?] Certainly I think one of the best illustrated covers I have seen for a horror film book, I always prefer this sort of cover compared to a photo cover. The Pictorial History of Horror Movies was first published by Hamlyn in 1973 and reprinted a number of times throughout the 70's and an updated softcover version was published too. As well as the index, there is also an Appendix which lists 'H' certificate films, a filmography listing a range of Super 8 films, and a bibliography covering books and magazines.
Every horror film fan should have this on their shelf [preferably with cover showing]. Sorry my review is the bare bones, I'm not very good at reviewing books basically.
Posted by Paul at 10:38 pm 21 comments: