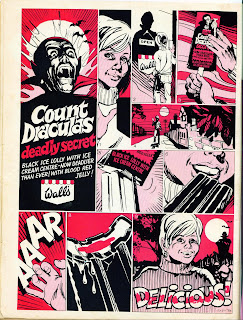 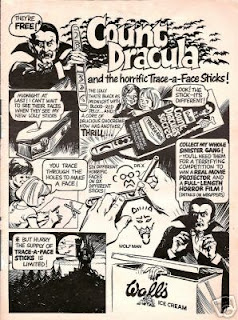 Who remembers these back in the 1970's? 'Count Dracula's secret' ice lollys, black ice lolly with blood red soft centre. Hope you didn't have sensitive fangs/teeth back then.
Posted by Paul at 10:57 pm 6 comments: Links to this post 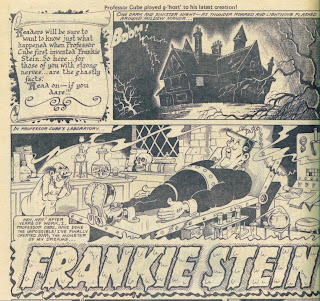 For your viewing pleasure here is a great peice of art from the popular comicstrip 'Frankie Stein', this image is almost on first viewing gives a look of a peice of art from a serious comicstrip, very filmic Frankenstein inspired. These panals are from 'Whoopee and Shiver and Shake' 12th October 1974.
Posted by Paul at 10:44 pm 3 comments: Links to this post 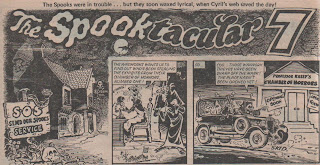 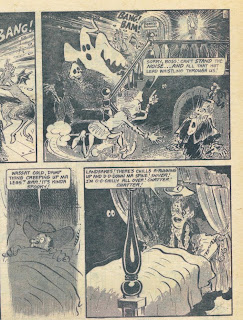 Scream Inn is in my opinion certainly one of the most atmospheric of all the comicstrips featured in the Fleetway line. The illustrations were dark and full of creepy details, it really gave you a sense of a spooky place on a dark and stormy night. Scream Inn is to the TV series 'The Ghosts of Motley hall' that 'Hire a horror' is to TV's 'Rentaghost'. Although 'Scream Inn' remainded popular, the stories would run out of steam; so an evolution of stories and a change of title to 'The Spooktacular 7' would eventually appear in issues of 'Whoopee'. The scans here show the title panals from both titles and an example of 'Scream Inn'/'Spooktacular 7' artwork. Thanks to John.
Posted by Paul at 10:05 pm 1 comment: Links to this post 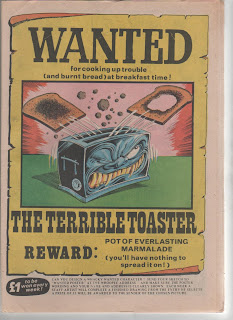 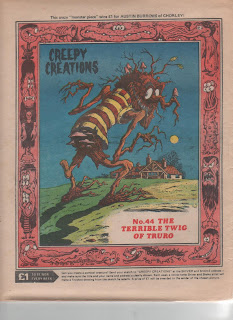 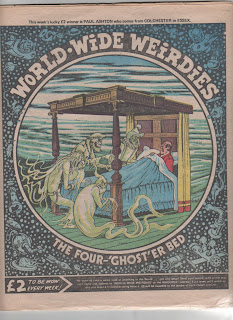 One of the Fleetway comics main artists was Ken Reid - The artist's artist, creator of Frankie Stein, Faceache, etc.
The scans here are some of Reid's illustrations used for 'Creepy Creations', 'World wide Weirdies', etc. These series of pictures would appear for several weeks in a number of Fleetway's line of comics, the full page pictures usually appeared on the back pages.
'Wanted' comes from 'Whoopee' (15th June 1974), 'Creepy Creations' - 'Shiver and Shake' (5th January 1974), 'World wide weirdies' - 'Whoopee' (14th October 1978).
If you would like to see more of these series of illustrations please let me know.
Thanks to John for scans/info.
Posted by Paul at 9:35 pm 8 comments: Links to this post