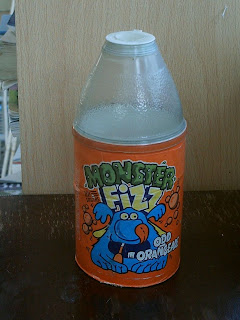 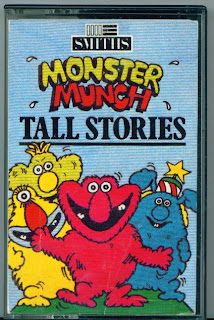 Normally you associate Smiths Crisps with...well crisps, but here we have a couple of unusal 'Monster Munch' merchandise from smiths Crisps. First up is a Monster Munch inspired drink called 'Monster Fizz' which was Odd Orangeade flavor, can't remember if there were any other flavors or what the Odd Orangeade tasted like. Monster Fizz came out sometime during the 1980's as far as I'm aware. Anyone else remember this short lived pop drink?

The next item from Smiths Monster munch is a cassette tape called 'Monster Munch Tall Stories'. There is no date on the tape or case but I think this also will be probally from the 1980's. It does say that it was copiled by Nabisco Brands Smiths Division and was produced by the 'V' team for Vinyltone Productions Ltd. Could this tape of been a item that you sent for from packs of Monster Munch or something sold in the shops?

Here is the track listing: 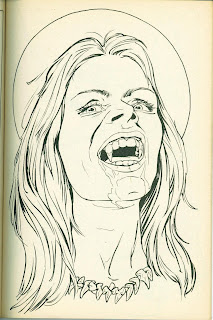 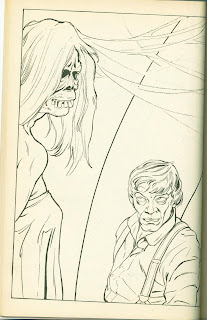 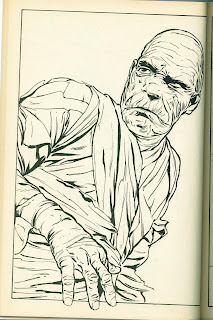 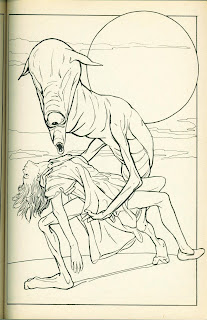 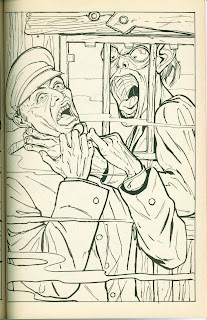 Just like the pictures from the Horror colouring book that I featured on May 14th 2008, there are no pictures that are the same that are featured on the cover. The Monsters colouring book features a Lovecraftian type monster whereas the contents although does feature some weird and strange creatures they are nothing like compared to the monsters on the cover. There are however some nice pictures of strange looking monsters, grisly scenes and a few that represent a monster or scene from a film such as the Mummy one above. How often do you get a child's colouring book that has such pictures in?
Posted by Paul at 10:52 pm 13 comments: Links to this post 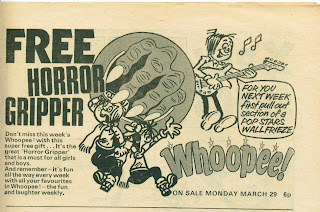 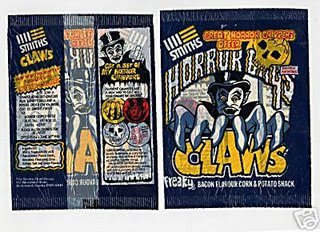 Anyone know if the Horror Gripper that came free with an issue of Whoopee (March 29th 1976) is the same one that Smiths Horror Bags promoted in the above pictures? The picture in the comic ad sure looks like the 'Claws' Horror Gripper featured on the Claws packet. I am hoping to get a photo of one of the Horror Grippers soon from someone who had sent for it from Horror Bags, as soon as I do I'll get it posted here. The whoopee ad was featured in 'Monster Fun' no.43.
Posted by Paul at 10:58 pm 3 comments: Links to this post 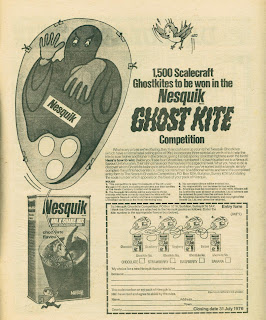 Here we have an ad that I saw in an issue of 'Monster Fun' no.44 (1976), it is a competition from Nesquick the milk shake people, I remember having these milkshakes when I was a kid and I really loved them, quite a distinctive taste to them, you can still buy them too. Anyway back to the ad, as you can see from the above picture the Ghost Kite looks quite cool and it has 3 special air vents to help the kite to climb higher and higher in the breeze. I'd love to see an actual colour picture of the kite if anyone still has one. Original retail price was 99p.
Posted by Paul at 10:38 pm No comments: Links to this post 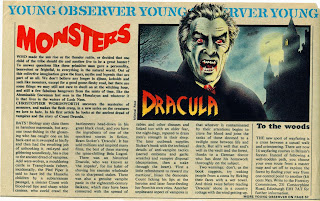 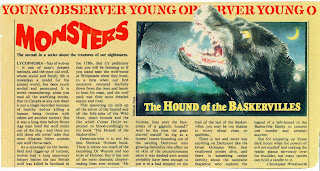 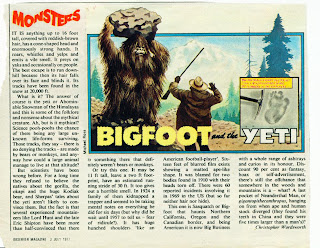 I came across these while looking through some clippings which I forgot I had, These were featured in the Junior Observer section of The Observer magazine. I thought that they were interesting enough to put on The Cobwebbed Room, especially the artwork you see here on these small peices about monsters, anyone know how many of these there were or does anyone have anymore they could share here? These are from 1977.
Posted by Paul at 10:49 pm 4 comments: Links to this post 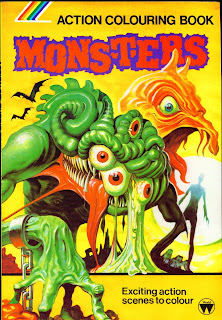 Here is the 'Monsters' colouring book that I promised to put on awhile ago. This came out the same time as the Horror colouring book that I featured on the post of 8th November 2007. Hoping to get some pictures scanned of some of the inside.
Posted by Paul at 11:10 pm 3 comments: Links to this post 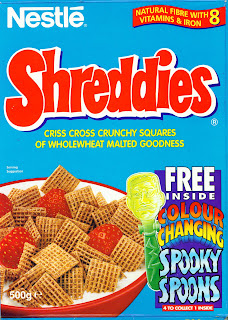 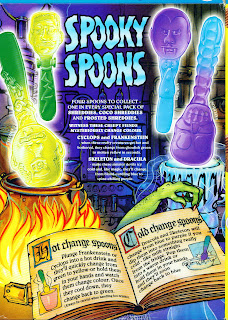 It wasn't too long ago that you could collect all sorts of wonderful items from boxes of breakfast cereal, usually found amongst the cereal itself, these free toys etc were probably one of the selling points of which cereal to buy, it certainly was for me. Now there is very rarely anything much you get free except maybe a free book or an offer of some sort. Why did they stop doing these free toys etc? Probably something to do with health and safety.
Anyway here is the front and back of a Shreddies box which came out during the 1990's in which inside each box contained a free plastic spooky spoon which would change colour when put into a hot or cold drink. There was Ghoulish Green which when put into a hot drink would change into Molten Yellow. The Green spoons were Frankenstein and Cyclops. The last two to collect were the Blood-Curdling Blue spoons which turn Spine-Chilling Purple when put into a cold drink. The Blue spoons were Dracula and Skeleton. These were a nice novelty and nice artwork on the back of the box. I used to have all 4 of the Spooky Spoons but I lost one somehow, I'll put the 3 I have on sometime.
Posted by Paul at 10:39 pm No comments: Links to this post 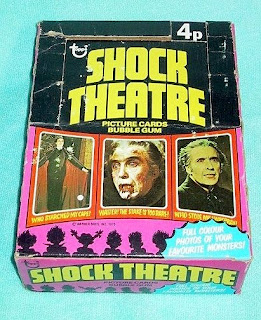 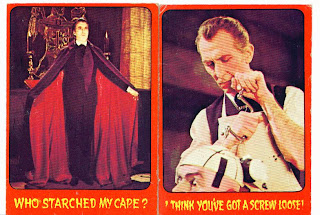 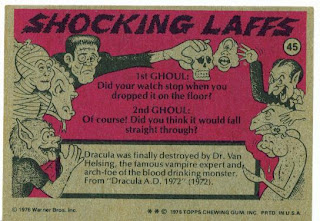 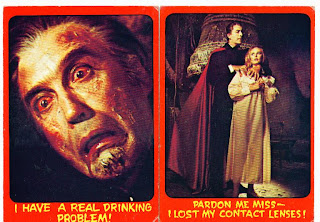 Similiar to the American 'You'll Die Laughing' bubble gum cards that came out during the 1960's/70's. 'Shocking Laffs' a.k.a.Shock Theatre was a set of 50 cards released in 1976 by Topps Chewing Gum Inc. and printed in the U.S.A. The set would feature wonderful colour photos from mainly Hammer Dracula films. The 'You'll Die Laughing' cards would feature black and white photos from mainly Universal Monster films, many of these photos were altered and would feature mystery faces in place of the non-monster characters featured in the photos. Films that were covered in the Shocking Laffs cards were 'Dracula a.d.1972', 'Frankenstein must be destroyed', 'The Satanic rites of Dracula', 'Dracula has risen from the grave', and 'Taste the Blood of Dracula'. Also Like the You'll die Laughing cards the photos would have a corny caption underneath and on the back an equally corny joke usually between 2 monsters, ghosts, witch doctors etc. Underneath these were a little description about the film scene featured on the front. The jokes and description were framed by cartoon monsters, the same on each card. Shocking Laffs background colour on the backs of the cards were either light red or dark red, strangely the set of 50 cards did not have a number 17 but instead had 2 number 47 cards, not sure the reason behind this. Apprently there is also 2 number 40 cards both have the same photo on the front but a different joke on the back, there is also a rare American test set that features some cards with different photos on the front.
The pictures above show an original box that the cards would of been sold in, this was featured on ebay a few years ago, I have no idea what it sold for, but I am pleased that I saved the picture as I have never seen another anywhere. The other pictures show examples of cards-No.5 showing a scene from 'Frankenstein must be Destroyed' and No.15 with a scene from 'Taste the Blood of Dracula', next is a the back of card No.45, and the last picture shows both No.47s.
Posted by Paul at 10:42 pm 12 comments: Links to this post 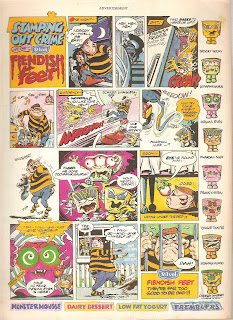 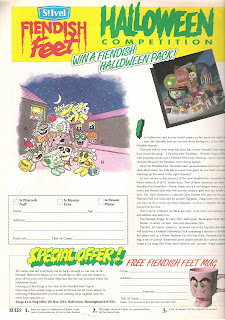 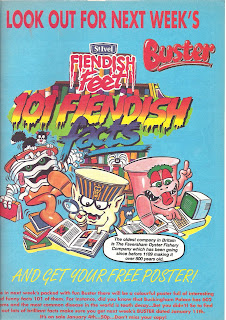 Anyone remember these and still have any?

These Fiendish Feet Yogurt pots are great fun and featured 8 different designs of which you can see on the top picture on the left hand side of the comicstrip. These all came out during the early 1990's. As well as the comicstrip you see above, there is a Fiendish Feet competion in which you could win some Halloween goodies and also send for a wonderful Fiendish feet cup, the other picture shows an advertisement for Buster comic which contained The fiendish feet 101 Fiendish Facts as well as a poster.

Thanks to Peter
Posted by Paul at 9:52 pm 2 comments: Links to this post