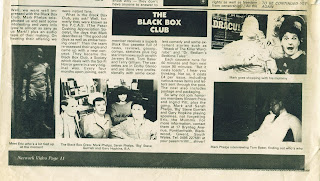 I did a post sometime ago regarding the audio cassette magazine 'The Black Box Club' of which I still have been unable to find anywhere that as any copies of the tapes that were made during the 1980's, there also doesn't seem to be anywhere on the net that has anything about this either. Surely there must be someone who remembers the Black Box Club besides myself. Anyway here is a short article that appeared in the newspaper style publication 'Network Video' that came out during the late 1980's/early 1990's regarding the Black Box Club.
Posted by Paul at 11:48 pm 2 comments: Links to this post