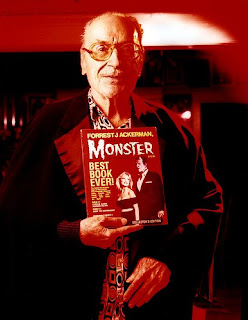 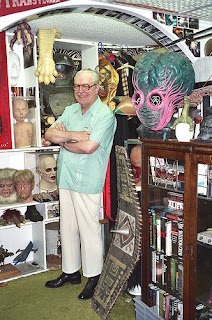 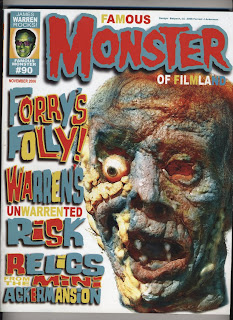 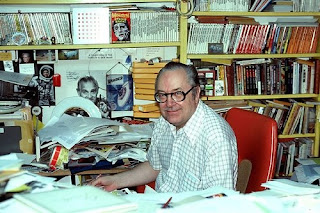 On December 4th of this year Horror, Science Fiction, and Fantasy fans have lost the most influential person within the genre, Forrest J Ackerman. Also known as Uncle Forry, Mr.Sci-Fi, Mr.Monster, 4E, FJA, Dr.Acula, etc. For those not familiar with the name [shame on you] Forrest Ackerman had been a life long fan, editor, writer, agent, archivist, actor, collector, etc, etc of all things horror, science fiction and fantasy. He saw is first fantasy film 'One Glorious Day' when he was 6 year old and began collecting fantastic memorabilia soon after which he continued untill the end. Through out his incredible life he has seen just about every genre film including the now lost Lon Chaney snr film 'London after Midnight' [Forry also had the Beaver hat and the teeth that Chaney wore in the film, as well has owning Chaney's make-up kit]. Forry discovered Ray Bradbury, was friends with Lon Chaney, Boris Karloff, Bela Lugosi, Vincent Price, Peter Cushing, Angus Scrimm, Robert Bloch, Peter Jackson, Steven Speilberg, Joe Dante, Ray Harryhausen, Tobe Hooper, Ed Wood jnr, Elsa Lanchester the list goes on and on. Many of these famous actors, directers, make-up people were inspired to become what they are by reading a monster magazine that came out in 1958. This the first of it's kind was called 'Famous Monsters of Filmland' and was edited by Forrest Ackerman and published by James Warren. The magazine in its original run lasted for 191 issues of which Forry edited 190 issues. The magazine was aimed at the 11 to 13 age group and the magazine was full of fasinating articles and photos from the great monster films, most of the stills seen in Famous Monsters were from Forry's collection. Forry's freindly approach to the magazine with his puns, humour was a hit with the kids, but the magazine also had its serious side too with wonderful features on wonderful horror/monster films as well as on the actors, directers, make-up men, writers, etc. A section called The Graveyard Examiner would feature horror/monster fans writing about their collections, monster make-ups, or super 8 film making. Forry made monsters fun, interesting and made fans of the genre realise that there is no harm in liking monsters. As well has editing Famous Monsters, Forry also edited 'Monster World', 'Spacemen', 'Monsterland', 'Wonderama', etc. He invented the Vampirella comic character also published by Jim Warren, coined the term 'Sci-Fi', appeared in films such as 'Amazon Women on the Moon, Schlock, Innocent Blood, Brain Dead, Return of the Living Dead pt2, Michael Jackson's Thriller, Beverley Hills cop 3, Mausoleum, Dracula vs Frankenstein etc, etc.
Forry's vast collection of Science Fiction, Fantasy, Horror, Monster memorabilia was housed in his 17 room 3 garage residence which was termed The Ackermansion. The incredible collection included over 50,000 books, tens of thousand stills, one of Bela Lugosi's Dracula capes, Lugosi's dracula ring, Boris Karloff's Mummy ring, Dinosaur models made by Ray Harryhausen, Original head of The Creature from the Black Lagoon, Don Post masks, thousands of pulp magazines, over 250 different editions of Dracula and Frankenstein, model kits, autographs from the likes of Lugosi, Karloff, Chaney, Mary Shelley, Bram Stoker, Vincent Price, in fact probally all of those involved within the genre of Horror, Science Fiction and Fantasy, original props, models etc from films and Television such as King Kong, Gremlins, Frankenstein, War of the Worlds, Picture of Dorian Gray, The Outer Limits, Forbidden Planet, etc etc. Then there are original paintings by Bok, Virgil Finley, Basil Gogos and many others, I could go on and on. Anyway you can probally understand why Forrest Ackerman was and is still a very important man for what he did for the genre in so many ways as well has being a wonderful, kind, funny, inteligent man. R.I.P.
The first and only time I met Forrest Ackerman was March 1991 at the Scala Cinema in London, he was guest at a small event called 'The Famous Monsters of Filmland Festival', also there that day were Ray Harryhausen and Johnny Legend. I was in total awe of Forry, I at last was meeting the man I read so much about and read so much about his collection, He was very likable, who shook your hand, smiled and signed any books, issues of Famous Monsters etc. He always had so much time for fans and enjoyed talking about the genre and had so many interesting stories to tell about his life, the people he met, the films he appeared in, his collection etc. Forry was wearing the famous Bela Lugosi Dracula ring and the Boris Karloff Mummy ring and behind him was sat the Horror Hall of Fame Grim Reaper statue that he was presented with. I chatted with Forry and showed him some photos of my collection of Horror memorabilia and photos of Bram Stoker's urn at Golders Green in London, I said that he could have any of the photos to keep if he wanted and he chose one of me when I was much younger holding a copy of House Of Hammer magazine and rubber bats hanging from my ears, a year or 2 later my picture was included in 'Wanted more readers like...' in 'Monsterama' no.2. I feel so honoured to have met such an amazing person, my regret was that I never got to see the Ackermansion in Hollywood. Thank goodness there are many photos and footage of the Ackermansion and Forry to enjoy.
Posted by Paul at 10:59 pm No comments: Links to this post