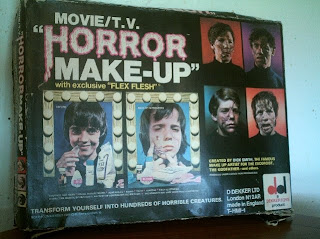 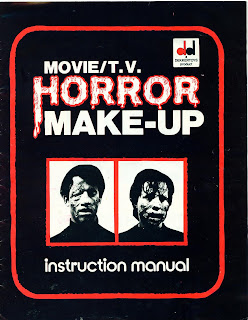 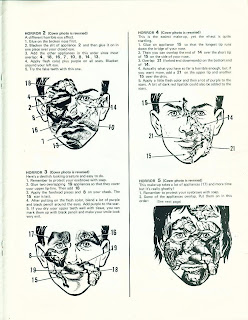 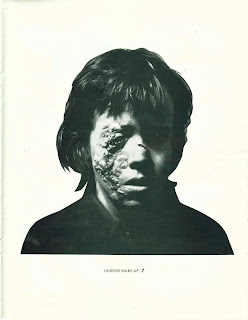 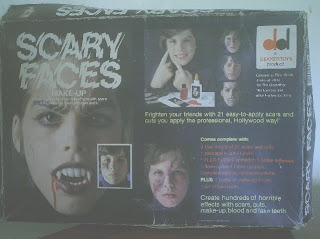 Dekker Toys 'Horror Make-up kit first came out during the 1970's and was created by world renown make-up artist Dick Smith who created the make-up for 'The Exorcist', 'Little Big Man', 'The Hunger' etc. This wondeful kit was perfect for those wanting to turn themselves into grisley creations for Halloween, amateur horror films or just for freaking out people with bloody gashes, cuts and scars. The kit came with Flex Flesh which is a powered substance you mixed with water and poured into any of the several moulds contained within, these were of cuts, gashes, swollen eye sockets and noses etc. The Flex Flesh when set was supposed to turn into a flexible latex wound etc. A lot of the time I tried it my flex flesh just went too hard to be able to use as a flexible wound to stick onto the skin, it was like trying to stick un-cooked pasta to yourself, not sure what went wrong with the mixture. If it did turn out ok you could then stick it on to yourself or any willing person, and then blend in the grease paint stick to give it a more realistic colour, and of course adding blood to the wound etc. I never got round to creating a full make-up with the kit, just the odd scars, cuts or gashes which if did right could look quite realistic. The Instruction manual illustrated a number of creations that could be tried out on yourself or on another person. As well as the moulds, blood, Flex Flesh and glue, the kit also had several different size spoons for measuring the flex flesh, some plastic teeth and I think some false hair too. I don't have everything that was in the kit as I think I may of got it secondhand. I did get the smaller later version of the kit which was called 'Scary Faces' [see pic above] new, but this kit is now un-complete.

I would love to hear of your experiances with the Horror Make-Up kit and especially to see any photos of your efforts.
Posted by Paul at 9:57 pm 31 comments: Links to this post 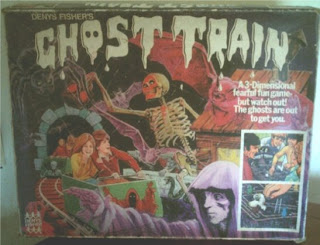 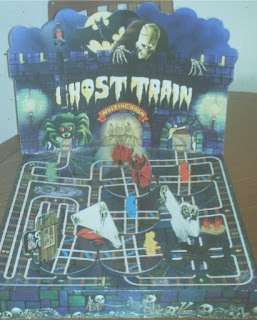 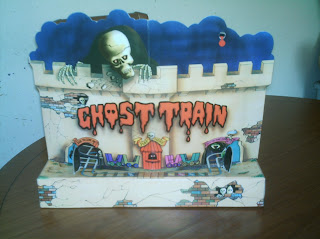 The 1970's was I think a great decade for spooky board games, especially for the box art of a lot of them; 'Ghost Train' is no exception. I really love the graphics, the box art is second to none and what is great is that the box art matches the actual game too really well. It is this kind of creepy artwork that used to grace some of the best horror comics of the 50's, 60's, & 70's and even some horror film posters of the time. The box art is really atmospheric and certainly more atmospheric than any actual Ghost Train rides, although some of these Ghost Trains have some really amazing graphics and spooky effects. The game itself as you can see from the above picture also is decorated with nice creepy artwork even around the sides of the raised gameboard. There are some really nice touches such has the waiting room on the back wall of 3 skeletons sat down, the Ghosts, Skeleton and Bat attached to some of the turning wheels of the board, the big green spider hanging over one of the entrances/exits. I love that domed skull headed ghoul looking over the top of the building, whom also appears on the reverse of the back wall [See above]. I won't go into how the Ghost Train game is played [Maybe at a later date] but I just thought it was more special to show the actual images of the game.
Posted by Paul at 9:58 pm 9 comments: Links to this post 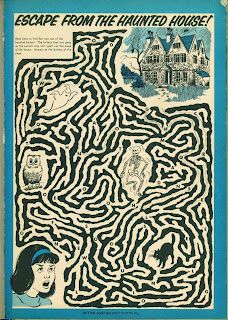 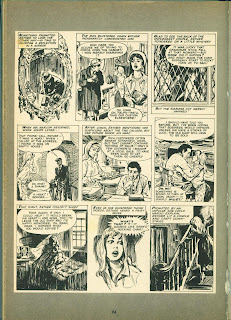 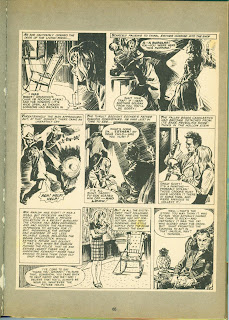 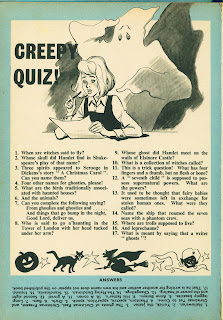 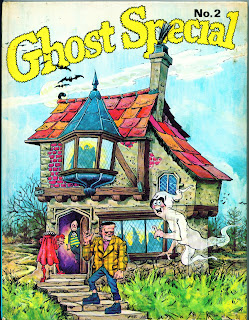 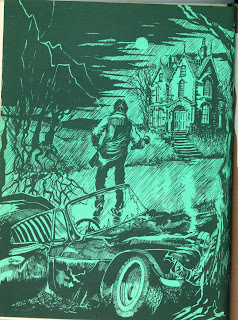 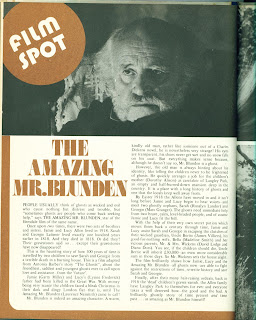 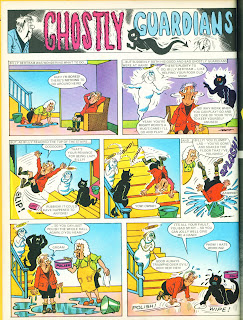 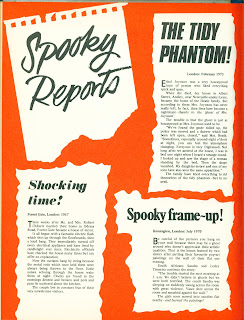 If anyone can shed any light on this book I would really appreciate it, I would especially like to know whether it was a spin off of a comic or suchlike and know if there were any other editions after No.2. I have never seen 'Ghost Special' No.1, so that would be really great to see if anyone has a copy they would like to share a few pics from it or even just some information about it would be ok too.
This slightly larger size annual 'Ghost Special' No.2 is a real mixbag of spooky content, containing comicstrips, short stories, crossword, jokes, film reviews, quiz, true stories, game, and spooky reports. The comicstrips are aimed at the younger readers especially the funny ghost strips which are similar to the ones that were featured in many Fleetway comics. The jokes are pictures with the joke underneath, film reviews cover such films as 'The Amazing Mr.Blunden', 'Bedknobs and Broomsticks' etc, the true story features include The Grey Lady of St.Thomas, Borley Rectory, The Spirits of Windsor etc. All in all Ghost Special No.2 is a nicely put together book. The inside front cover has a nice illustration of a spooky carriage and horses. As regards to the date of the book I am not sure because there is no date, the only clue is one of the spooky reports is dated 1974, so I would guess 1975/76.
Contents:
CS = Comicstrip
Jimmy's Genie [CS]
The Regimental Ghost
Aladdan's Wonderful Lamp
Ghost Crossword
Spoofer the Spineless Ghost [CS]
House on Moonlight Hill
Ghostly Giggles
Sammy Spook [CS]
The Amazing Mr.Blunden
Bedknobs and Broomsticks
Now you see him, Now you don't
That's the Spirit
The Grey Lady of St.Thomas
Ben Macdhui - The Haunted Mountain
Some Mysterious Worlds
{Note: A comicstrip is here but seems to no title}
The spirits of Windsor
Ghostly Giggles
The spookiest House in England [Borley Rectory]
The remains of Borley Rectory
Game
Ghostly Guardians [CS]
Witches, Wizards and warlocks
The Civilisation which became a ghostly legend...
Grubby the Greedy Ghoul [CS]
Flying Saucers - Fact or Fiction
Spooky Reports
Ghostly Giggles
Spoofer the Spineless Spook [CS]
Ghosts of the road
Grubby the Greedy Ghoul [CS]
Ghostly Giggles
The Ghost Light
Ghostly Giggles
What would you do if..?
The Ghost who returned

Published by Panda Publishing
Posted by Paul at 9:16 pm 13 comments: Links to this post 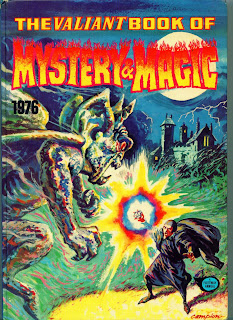 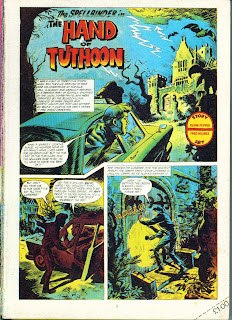 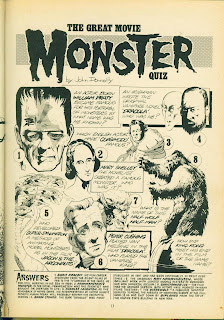 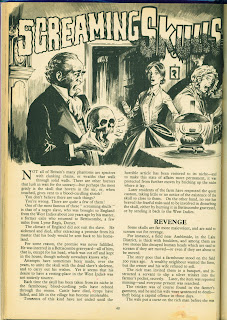 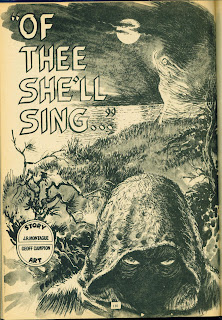 Here is another annual special this time from Valiant comic. The cover pictured above features the main charactor Sylvester [aka The Spellbinder] an alchemist from centuries ago. Sylvester is featured in most of the comicstrips in the book. Besides the comicstrips there are short stories, a monster movie quiz [see above], a feature on Dracula and his guises, weird facts from around the world told in a comicstrip type format, feature on Houdini, Chung Ling Soo, Lafayette, etc, I really like some of the atmospheric illustrations featured throughout the book, especially the one featured above by Geoff Campion, other ones by Joe Colquhoun, Eric Bradbury are equally as nice and atmospheric. I have never really seen any issues of Valiant so I am not sure if any of the characters such as The Spellbinder were one of the regular characters featured in the comic.