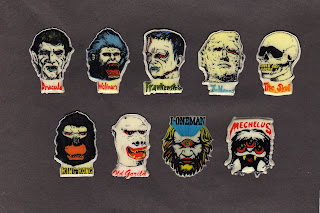 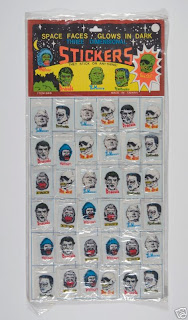 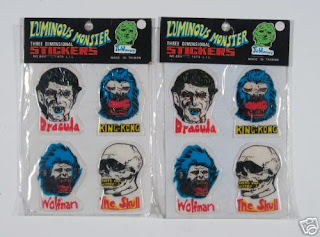 I remember seeing these back in the late 1970's at a local toy shop, I think they were originally made in America, but as they are still part of Horror British culture I thought I would include them here. I suppose a lot of the monster toys we had as kids were produced in other countries as well. You don't really think when you are younger where the toys were made only that they were cool items to own and play with.
These stickers came in two different sizes and were made of a soft vinyl, were slightly raised and some if not all glowed in the dark. I do remember that if you did stick them onto any object they really did stick well and you had a job peeling them off to put onto something else without taking part of the object with them. I am not sure how many were in the set, but I would imagine that the first picture here shows possibly all of them.

Thanks to John for the first image.

Posted by Paul at 10:13 pm No comments: Links to this post