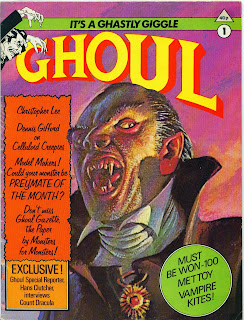 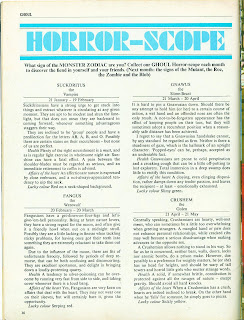 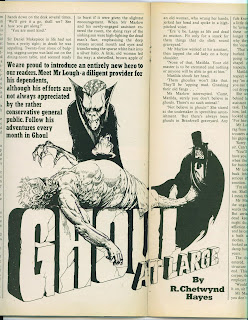 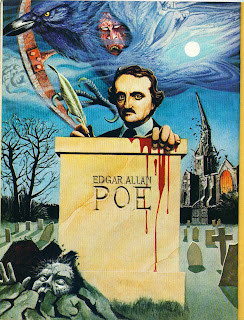 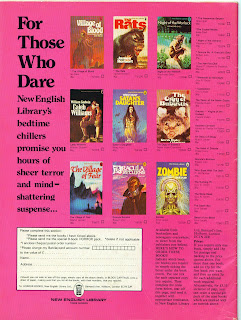 The dissapointing thing about 'Ghoul' magazine was that there was only the first issue published, which is such a shame as it could of been something really great. It reminds me somewhat of the other 1970's horror magazine 'World of Horror', both have a similar feel and style.
As well has the usual horror film features and reviews, 'Ghoul' would have a lighter side with the section Ghoul Gazette which was in the style of a newspaper which contained funny ghoulish stories, adverts and pictures. The cover of the magazine is a close-up of Dracula from the New English Library novel 'Dracula Returns' by Robert Lory and inside is a centre spread of the full picture which was the wraparound painting on the novel, the poster here printed minus the wording. Contents of 'Ghoul' are as follows:

'Beyond Terror' - Staff members telling what phobias, fears, nightmares they have.
'I meet the great Indestructible - Exclusive interview with Count Dracula' by Hans Clutcher - Spoof interview with the Count.
'Things aren't what they used to be!' by Denis Gifford - Horror films of the 1940's
'Horror-Scope' - Monster horoscopes with the birthsigns Suckdritus the Vampire, Fangus the Werewolf, Gnawus the Slime-Beast, and Crushem the Golen.
Christopher Lee - brief description about the actor illustrated with film stills
'Ghoul at Large' by R.Chetwynd-Hayes - Short story by the horror writer
'On the Prowl' - Chilling news from the scream scene.
'Kiss me quick' - funny captions to monsters kissing in films stills.
'Ghoul Gazette' - Spoof 2 page newspaper.
'Masters of Horror - 1.Edgar Alan Poe' by Walter Gillings - Profile of the master horror writer.
'Some new pleasures prove' - by Charles Birkin - Short story
'Celluloid Screams' - Gallery of 4 horror film posters
'Preymate of the month' - in which the readers were invited to send in their ghoulish monster creations, the one featured in this issue was called Octopus Man.

Also featured in this 1st issue were adverts for 'Science Fiction Monthly' magazine and 'The Monster Club' by R.Chetwynd-Hayes and also a competion to win a Mettoy Vampire kite. The back cover as shown above is an advertisement for a number of New English Library Horror titles.
Posted by Paul at 10:02 pm

Do you have the picture of the Mettoy Vampire Kite??
I had a Dracula kite I loved as a kid, but never found a picture of it since :(

Sorry I don't Darren, would really love to see a picture of it though.

I have a copy of this Mag, in good condition, what do you think the value of it is ?

Just watched the 1977 Children's Film Foundation-produced sci-fi film The Glitterball on the new BFI DVD -- and one of the kids in it has this very magazine,as well as issue 5 of House of Hammer Magazine, lying on the floor of his tree-house!

How much pages in this magazine?